De-classified: What really happened to newspapers

In the mid-1990s the status of newspapers as the main source of news to society felt both indisputable and permanent.

The Internet was a novelty. We accessed the web on dial-up modems, surfed pages using Netscape and searched for information on Yahoo!, Excite and Lycos. Around the same time, across the Pacific, Amazon had only just launched an obscure online bookstore.

In 1995, I began my career as a journalist at The Advertiser in Adelaide. The web was so niche that there were fevered debates about whether we would need one “Internet terminal,” or perhaps two, for an entire newsroom.

Newspapers back then could afford to take their time with technology - there was no rush. They were unassailable and spectacularly profitable, thanks largely to classified advertising. Rupert Murdoch once described classifieds as “rivers of gold”.

Today, as we all know, the landscape is vastly different. The print rivers of gold have dried up, print circulation has sharply declined. On the face of it, the news business has never looked so vulnerable. To me, and anyone else who has worked in print or simply loves newspapers, this has been a painful process. My dad worked in newspapers - it’s in our blood. 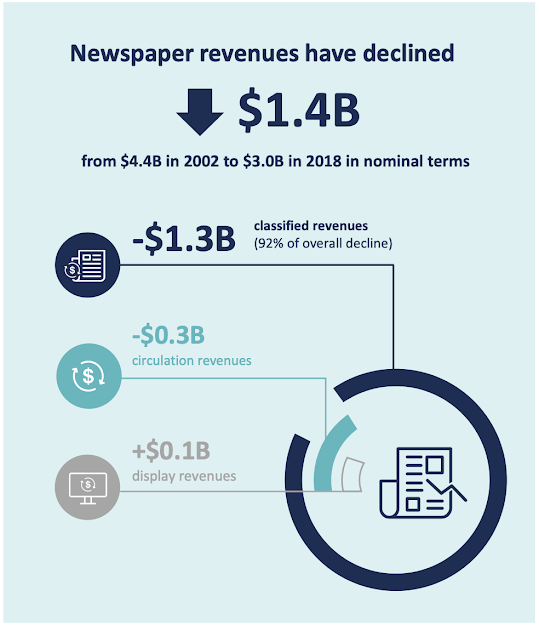 An analysis of the revenues of newspapers over nearly two decades, recently conducted for Google by the economists at AlphaBeta, is revealing - there is no mistaking precisely how and over what time period the old business model for newspapers broke. 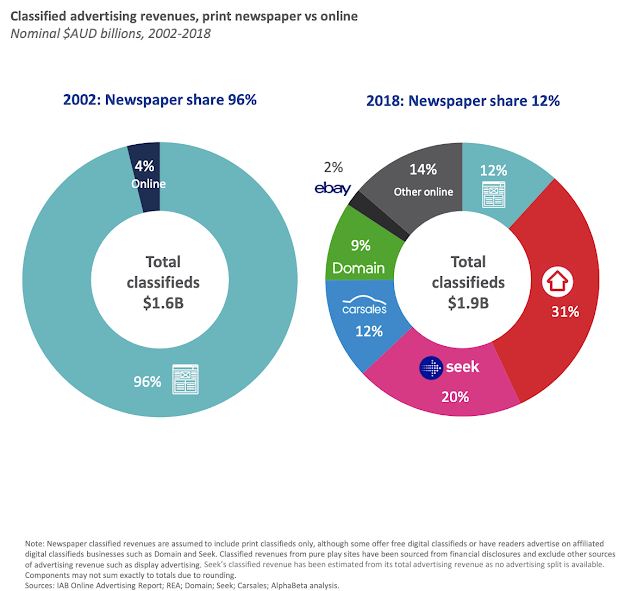 Over that same period we moved from sitting at bulky desktop computers with slow connections to carrying a supercomputer in smartphone form, with instant access to news and information. Australian newspaper revenues peaked at $5.5 billion in 2007-08, just as Apple introduced the iPhone. The smartphone in our pocket, able to access the content news publishers made available for free on their websites, was almost a perfect disincentive to buying the next day’s newspaper. We now consume more news, but fewer newspapers. 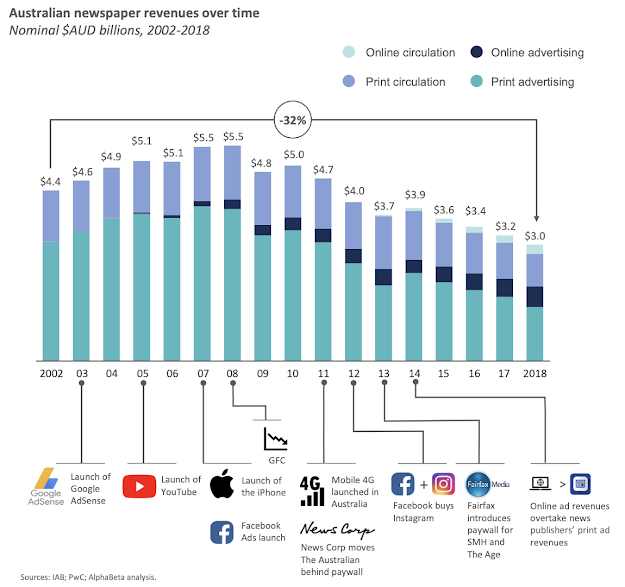 That’s not all that has changed, of course. Over the same period we’ve seen the transformative development of search and social media platforms. Google launched ads in 2003, and it has grown to become a global business as the web itself has expanded to hundreds of billions of pages. Facebook was founded in 2004, and today almost 3 billion people use it to connect with each other around the world. Together they earn billions of dollars in revenue from commercial advertisers in Australia.A widely held view is that if Google and Facebook didn’t exist, much of this revenue would have stayed with news publishers - that these tech platforms directly disrupted the newspaper business model. But AlphaBeta’s research disproves that theory: it wasn’t Google or Facebook specifically, it was technology in its entirety. 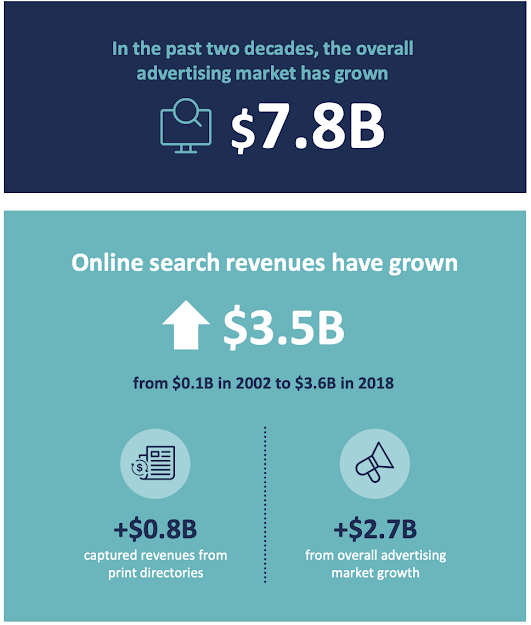 Search advertising is an entirely new category which allows businesses that would never have taken out a newspaper ad to reach specific audiences right at the instant they are seeking a product or service. And they only pay if a user actually clicks on their ad. Locally, Google’s advertising customers in Australia include a multitude of small and medium-sized businesses that never would have generated a substantial proportion of a newspaper’s income. If there is an incumbent publisher that has been disrupted by search ads, it’s directory operators like the Yellow Pages. 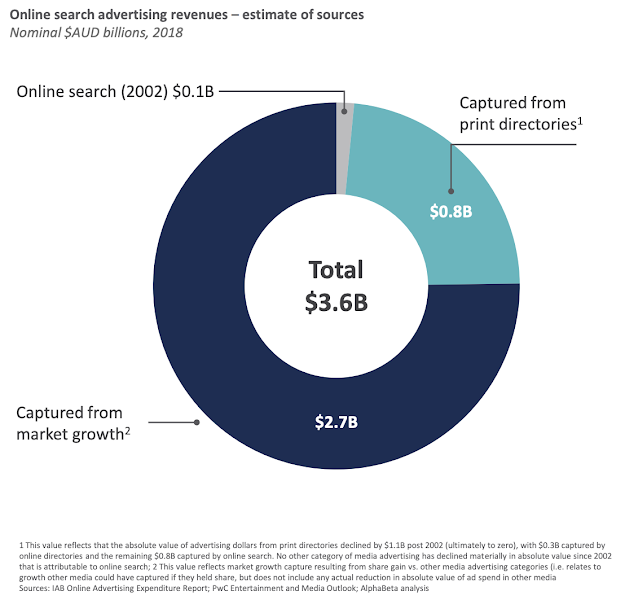 The total Australian advertising market almost doubled between 2002 and 2018 from $8.9 billion to $16.6 billion, and almost all of that growth came from search and social. But to suggest that that money would otherwise have gone to news publishers would require news publishers to have built their own search engines and social platforms. They didn’t.

Every time you use Gumtree to sell a bike, browse Domain for a place to live or flick through Carsales represents the flow of money away from newspapers. Major publishers still own large stakes in these digital classifieds businesses but the revenues no longer fund journalism. 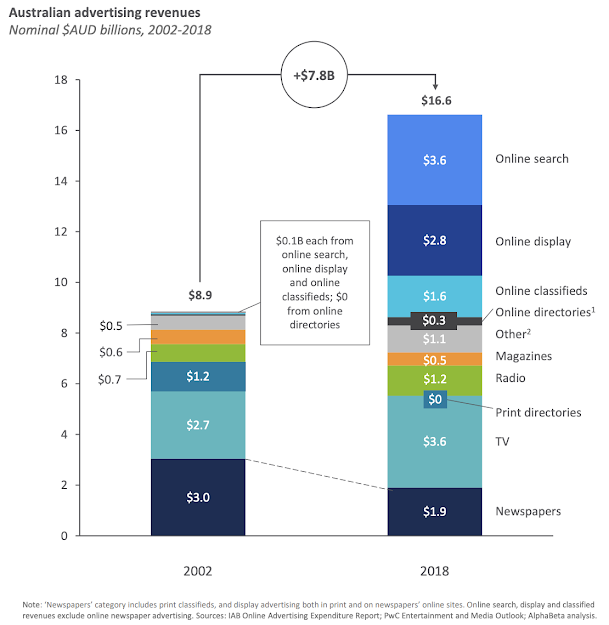 However, the AlphaBeta study also offers hope. The business model that was broken is being re-made through technology: distribution, analytics, advertising, subscriptions. Reader contributions and subscriptions are transforming the economics of publishing news. 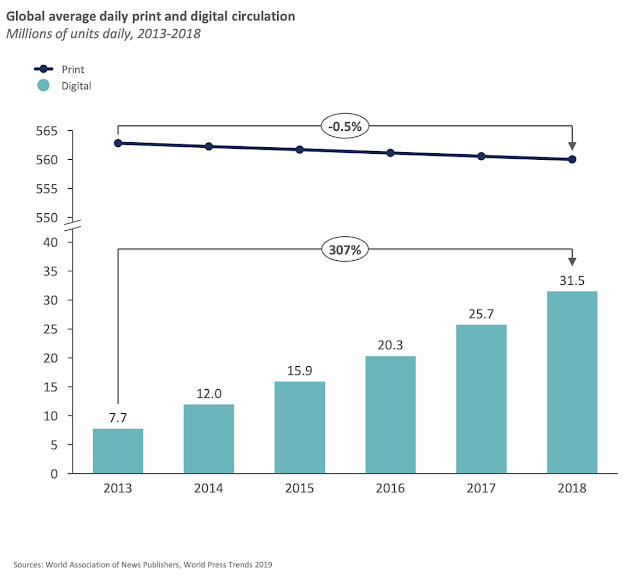 Today we spend greater amounts of time than ever before consuming the news, and there are many innovative new publishers finding readers that would have struggled to get a foothold in the days of the printing press. There are even green shoots of growth amid the COVID destruction - Telum Media reported this week that more than 30 new digital mastheads have emerged just this year.

In the quarter of a century since I first began as a fledgling print journalist the news industry has been radically, often painfully, transformed. It has taken years of trial and error, but there are paths that now lead to publishing profits and prosperity.It’s my hope that Google can continue to support the news industry, through new products which pay publishers for high-quality content, and continue the work we have been doing for almost two decades in helping newsrooms to find new audiences, engage them with compelling stories and generate new income through digital channels.