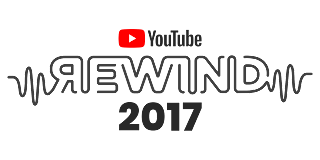 It’s that time again, to jump into the wayback machine for #YouTube Rewind - our annual look back at the year that was through the lens of YouTube.

This year Canadians headed to YouTube to gasp as a sea lion got a bit too frisky, to giggle as a toddler stole popcorn from Prince Harry, and to fall in love with falling in love. We gathered to watch as April the Giraffe gave birth to her baby, Tajiri, live in front of an audience of 1.2 million, setting a new record for the most popular livestream on YouTube. And we held our breath as a moose and a wolf squared off in a Northern Ontario lake.

From Eminem’s blistering political cypher at the BET Awards to some perfectly executed ping pong trick shots, these were the moments that had us watching, clicking and sharing.

2017 also saw some major new records broken in music, most notably by Luis Fonsi and Daddy Yankee's massive global hit. Despacito sits at the top of 2017's top music video list -- not just as the most-viewed music video for year, but as the most viewed YouTube video of all time with 4.4 billion views.

Justin Bieber set new records this year - his remix of Despacito, along with his appearance on DJ Khaled’s I’m The One mean that the Biebs can now lay claim to 4 videos that have broken the one billion view threshold. Taylor Swift’s Look What You Made Me Do set the all-time record for most views in the first 24 hours, earning 43.2 million views in its first day. Among the top ten debuts in YouTube history, seven were released in 2017.

When it came to movies, we saw studios get even more creative with their pre-marketing campaigns, with both Thor: Ragnorok and Deadpool 2 releasing a series of short films on YouTube that played up their comedic main characters. But as we wait for the release of the next instalment of Star Wars on December 15, the teaser trailer for this highly anticipated film claims the top spot in this year’s ranking.

YouTube has also changed the game when it comes to ads - in the past five years, ads have gone from something you fast forward to something you choose to watch. The YouTube Canada Ads Leaderboard showcases the most creative ads that Canadians chose to watch during the year. The Top Ads are selected based on an algorithm that factors in metrics including views, watch time and shares.

Head to the YouTube Rewind channel to check all the videos and relive the best of 2017!