Come start something with us at Campus Seoul 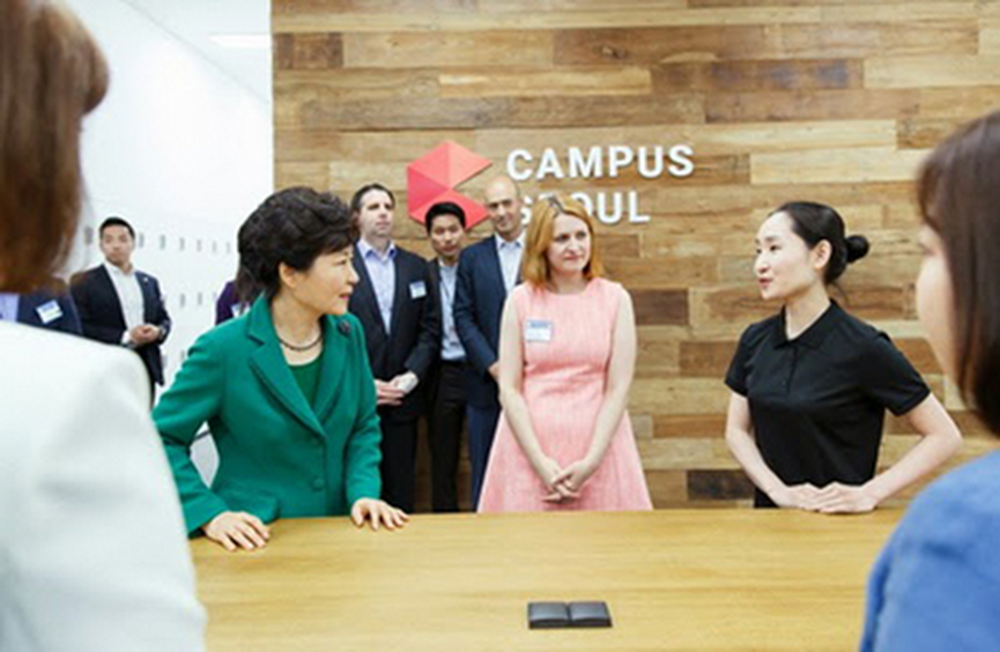 President Park stopped by to help us get things started, here she talks to a group of aspiring mom entrepreneurs

As we said when we announced the space last year, Seoul was the right place for a Campus for so many reasons. Startups here are already flourishing, and there’s an incredible growth of innovation in Seoul. With more than 7 in 10 Korean’s using a smartphone (not to mention connecting with the worlds fastest Internet speeds), startups here are also already living in and developing for a mobile-first world others will use in the future. There’s a Google office a few subway stops away, full of Googlers who can’t wait to help out as mentors and speakers.


So, what will you find at Campus Seoul?
Our space for entrepreneurs
Our goal with Campus Seoul is to create a space where entreprepreneurs can thrive. Where they can feel at home with the local community, yet have everything they need to build a global company. So, at Campus Cafe, founders and soon-to-be founders can get to work. They can use the device library to test apps across dozens of different devices and operating systems. If they need to host an event, they can apply to use our large event space and classroom (for free!). And, of course, there’s a beautiful collaborative coworking area with a mix of open desk space and private offices for entrepreneurs, growing startups, and community partners like 500 Startups’ recently launched fund, 500 Kimchi.

How about a quick tour?

A unique approach to education
Campus Seoul is more than just space. It’s a wealth of programs designed to educate, inspire and connect the local tech community. It’s a place for day-to-day learning through workshops on design, product development and customer acquisition, as well as one-on-one mentoring with Googlers and industry experts. It’s a place to connect with the rest of the world, for Korean startups to go global through programs like Campus Exchange, which brings international entrepreneurs to Seoul, and gives Korean entrepreneurs an opportunity to work out of one of our other Campuses around the world. It’s a place for everyone – with programs like Women @Campus and Campus for Moms, a nine-week baby-friendly startup school for new parents. And we’re really just getting started.

The startups are already at work
A few weeks ago, we started inviting the startup community to try out a beta version of Campus Seoul. We gave them early access to the space, brought in some great speakers from TechCrunch and 500 Startups, ran a sold-out event for women entrepreneurs, hosted an Android bootcamp and kicked off mentoring sessions. Already, more than 1,000 people have signed up to be members of Campus Seoul. And in the coworking space, we’ve welcomed some longer term residents, including Venticake, the company behind the camera app Retrica (with over 160 million downloads so far), and ChattingCat, a streamlined English writing assistant service.

A global vision for Korea
Just over three years ago, we launched our first Campus in London. At the time, we didn’t have global expansion in mind, we were just trying to see if we could make a meaningful impact in London, and help startups there grow. Campus Seoul is modeled after Campus London, because, three years on, the momentum we’ve seen is simply stunning. Since opening it’s doors in 2012, the community at Campus London has grown to more than 40,000 members, and startups there have created more than 1,800 new jobs, raising over $110 million in funding. We see the same potential in Seoul – and knowing Korea, we’re pretty sure the startups here are going to take the world by storm.

So what are you waiting for? Come start something with us at Campus Seoul.