Komal Singh wants kids to see themselves in her books

In 2018, Komal Singh published “Ara the Star Engineer,” a children’s book about a little girl who becomes interested in coding. Komal, an engineering program manager at Google, wanted to give girls an example of what they could be. Since then, she’s been exploring ways technology can make books more diverse for kids. “I set up my own team and I was pitching my ideas,” she says. “It was like setting up a little startup of my own. And while I was going through this process of building and pitching and scaling, I realized, whoa — we should write a book about this!”

Engineers are girls: the Googler behind “Ara the Star Engineer”

A Q&A with Komal Singh, a Googler who created Ara the Star Engineer.

Enter “Ara the Dream Innovator,” a new book published by PageTwo Books, illustrated by Ipek Konak and authored by Komal. The latest in the series finds Ara coming up with her own innovation, and trying to make sure it’s inclusive “FTW” (which stands for “for the world”). Of course, Komal had plenty of real-life experience to serve as inspiration.

Were you interested in tech at all when you were little?

I grew up in India in the ‘80s, and my father was an engineer. He would use everyday things to instill curiosity in us. If we were sitting under a fan he would ask, “How many rotations a minute do you think the fan is doing?” That’s what got me interested in the sciences. I really liked logic and coding, which is what eventually drew me to computer science.

Do you find yourself having similar conversations with your kids?

Yes! I have two kids, a 7-year-old daughter and a 3-year-old son, and I try to find opportunities to make them curious about science and the world around them.I’ll ask them “if you could fill your lunch box with atoms, how many would fit in there?” Or I’ll ask if they want to come up with an algorithm for getting ready for school.

What have you been working on since your first book?

Both books were inspired by my own experiences. So with the first book, it was something my daughter said — that she thought only men were engineers because that’s what she saw — that triggered it. After publishing the first book, I wanted to see how I could take storytelling to bigger heights with the help of technology, so I set up a 20 Percent Project, which is when Google invites employees to spend 20% of their working hours on passion-related assignments aligned with some of their work goals.

Our team used AI models to morph popular characters in media to look like underrepresented children, so these kids could see themselves represented in books. For instance, we found that AI models didn’t recognize photos of children with alopecia, because they hadn’t been trained on that dataset. We don’t want kids to be left behind and not see themselves reflected in children’s literature. This technology could better represent the whole spectrum of people, and hopefully one day it could be used to broaden characters in children’s movies and books. 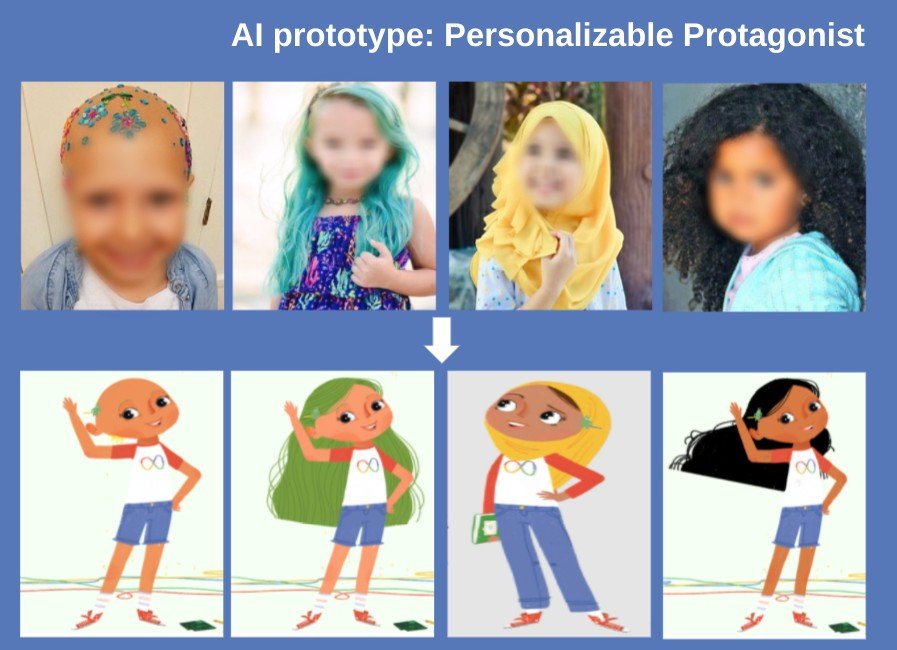 Komal’s 20 percent team is using AI to make characters that all kids can see themselves in.

The process of taking ideas and turning them into reality inspired the second book. Not only what it’s like to build something from an idea, but also about making sure your innovations are inclusive and equitable.

What does Ara build?

She builds a “dream decoder,” which captures your dreams, because that’s when she has all her best ideas. She then founds a startup with her droid DeeDee to make sure the dream decoder works for all kinds of children around the world, like children who have disabilities or children from different ethnic backgrounds.

What does your daughter think of the new book?

She loves how Ara builds a team of her own and tries to make her team diverse — she likes that idea of having all sorts of people on a team. She’s fascinated by that.

Do we meet any new characters?

We meet some real-life women founders! A big focus is to diversify characters so young BIPOC readers can see themselves represented. And one cool thing is, and this was unintentional, one of them is Maayan Ziv, the founder of an accessibility focused tech startup — and she happens to be in the current Google for Startups class.

There are also Ara’s friends, the Super Solvers, a really diverse group. It was enlightening creating our Indigenous Super Solver; we really wanted to get her right. Neither the illustrator or I are Indigenous, so I reached out to an Indigenous Googler, and she was so helpful. Looking at the first version, she was like “this looks like if a Westerner designed it.” And rightly so! That was such a check of our bias.

What’s the hardest part of writing a book?

The second book was easier because I had a path, but the expectations were much higher! But it was really my conviction that such books need to exist, that children need to have these books, that pushed me. I read somewhere that inspiration is a prerequisite to learning, and these books are not about teaching children to code or launch a startup — they’re about teaching them they can code, they can launch a company.

Do you know what’s next for Ara?

My new role in responsible AI for Media is influencing the next book: I want to explain AI to children and parents and families in a way they understand, and also the importance of tackling bias in AI so we can make sure AI systems are fair.