Women who code: “I just want to see us win”

Naia Johnson knows what it’s like to feel outnumbered.

“I have a computer science program at my school but I’m one of five girls in my class and of all the Black girls, I’m maybe one of two.” Naia explains. “It’s never deterred me, though — if anything, it has made me want to do better.”

Naia is a high school senior at Oakland Technical High School as well as a student at Google’s Code Next Lab in Oakland, a free computer science education program aimed at preparing and uplifting the next generation of Black and Latinx tech leaders. Naia is the first Code Next student to facilitate a workshop — she’s currently leading a virtual “Creative Coding” club for other Code Next students.

At Code Next, Naia works with Amber Morse, the lab’s Community Manager. “I try to stay as relevant and creative as possible to continue to keep [students] engaged,” Amber says. “There is so much light, vibrancy and possibility already being met in Oakland, so fostering community doesn’t take much.”

Both Amber and Naia are working within Code Next and the Oakland community to reshape what the tech industry looks like — and more precisely, who it works for. For Women’s History Month, we asked Naia and Amber to interview one another so we could get to know them, and their work, a little better. 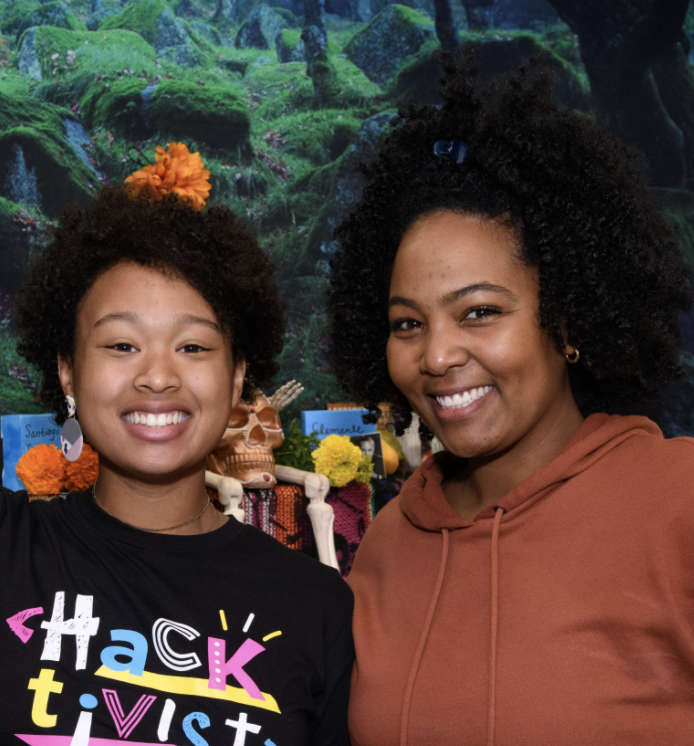 Amber: What got you interested in Computer Science, Naia? In other words, when did that spark... spark?

Naia: I think it’s always been sparked. Since a young age, I was a “maker” kid. One time I made a functioning radio out of snap circuits. It barely picked up anything unless I held it in a very specific place in the middle of my brother’s rooms and we had the windows wide open. It would pick up sports channels..in Spanish...but it worked. It's cool to think, ‘Wow I made this.’

Amber: I know you also had some involvement with Black Girls Code. That’s why we have this synergy, I think. Before Google, I worked for Black Girls Code and I’m sure at some point I was at one of your workshops.

Naia: Yes! I loved it. By far my favorite class with Black Girls Code was when we worked with Raspberry Pi’s [small circuit board computers]. We connected them to little go-karts and made cars move around. That was also my favorite group of girls. I’m still in contact with a lot of them today.

Amber: Aw, that’s so cool, I love to hear that! Yes to sisterhood!

Amber: What one’s lesson you carry with you from Code Next?

Naia: As cliche as it sounds, there’s no such thing as a silly question or a silly answer; it's something that needs to be said and something to be heard. It sticks better when you’re wrong because your brain is like, “Well I don’t want to be wrong again first of all.” Sometimes, not knowing the answer is better than knowing what to do. It’s not just about knowing why answer B is right; it’s also understanding why A, C and D are wrong. You learn more when you’re not just trying to be right. I really focus on these ideas in the Creative Coding Club that I facilitate.

Amber: What are your dreams and aspirations in life?

Naia: It goes back to the younger me living here somewhere. I want to be my own boss. That's my biggest dream. I also want to be a role model, because not only is it a tribute to my own success, but it will end up being a tribute to other black and brown girls interested in the tech field. I want to nurture and support more programs that cultivate an interest in CS from a young age.

Amber: You know, it’s already happening Naia. You’re a student ambassador for Code Next, and you are an example for so many students looking up to you. You may not know you’re in it, but you’re in it.

Naia: What about you?

Amber: I just want to see us win. When I think about all of our leaders and all of our supporters along the way, and when I see you and what the future might look like, I’m always inspired. That’s my inspiration, my aspiration... to continue to support women like you in ways to [get into] leadership positions, so that we can then support one another.