Data centers get fit on efficiency

Google’s efforts to build the world’s most efficient data centers are beginning to give back -- in energy. A study just released by the U.S. Department of Energy’s Lawrence Berkeley National Laboratory (Berkeley Lab) shows that in the last five years, data center efficiency has kept energy usage almost flat despite a huge growth in demand for computing power.

In fact, compared to five years ago, we can now deliver over 3.5 times as much computing power for the same amount of electrical power. That means that even though we’re sending more email, watching more YouTube videos, and saving more digital photos, we’re using the same amount of energy.

Let’s dig into some numbers from the report:

Stabilizing data center energy usage is great, but at Google, we believe we will go further than simply stopping the growth. As more IT users transition to public clouds and mobile use increases, total energy usage will likely go down even more. On the server side, ultra-efficient cloud capacity replaces older, less efficient corporate data centers, and on the client side, battery life pressures ensure that mobile devices use much less energy than desktops.

The cloud supports many products at a time, so it can more efficiently distribute resources among many users. That means we can do more with less energy—and businesses can too. In 2013, the Berkeley Lab published research we helped support, indicating that moving all office workers in the United States to the cloud could reduce the energy used by information technology by up to 87 percent. That’s equal to powering the city of Los Angeles for one year. 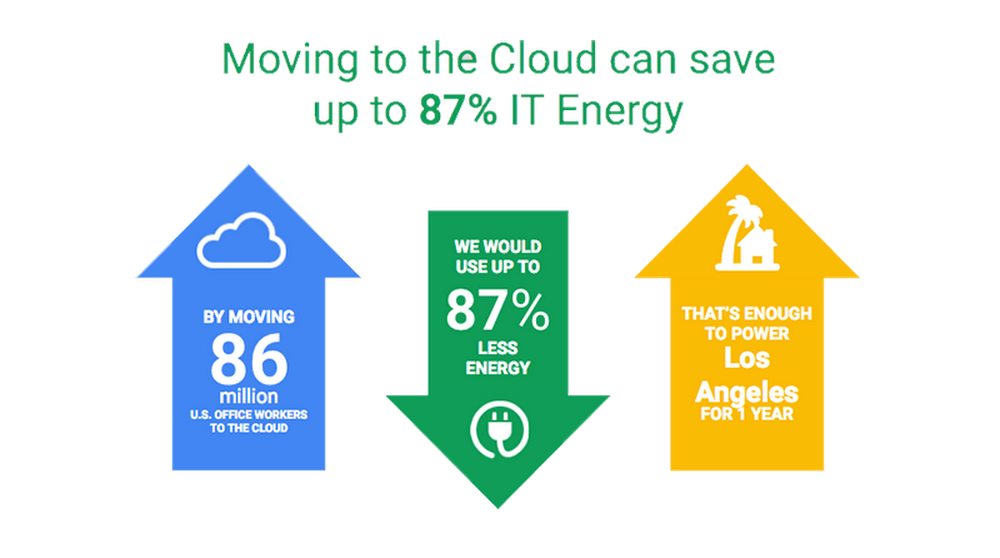 We are focused on creating platforms where everyone can benefit. Google builds hyperscale data centers that are designed to maximize infrastructure efficiency. We also began publishing our efficiency data in 2008 and have been promoting techniques for more efficient energy use to leaders in the IT industry, starting with the first data center efficiency summit in 2009 and our continued advances with machine learning.

These results show the rapid impact efficiency can have on the industry and the persistent opportunity we have to reduce energy use while creating a more powerful web.