Crime reporting gets a boost in readers: A GNI Journey

Editor’s Note from Ludovic Blecher, Head of Google News Initiative Innovation: The GNI Innovation Challenge program is designed to stimulate forward-thinking ideas for the news industry. The story below by Amos Gelb, publisher of D.C. Witness and Baltimore Witness, is part of an innovator series sharing inspiring stories and learnings from funded projects.

Violent crime is surging across America while cities scramble to reform their criminal justice systems. This is especially difficult because there is no single American criminal justice system. Every jurisdiction has its own practices, methods and even laws. What they all have in common, however, is a lack of reliable, up-to-date information that could drive local change by providing transparency and accountability.

Starting in 2015, D.C. Witness developed a new approach to criminal justice journalism to try to address this issue. Traditional crime reporting can give an incomplete and warped view of what’s really going on, often based on only the most salacious cases. Instead, D.C. Witness reports on every step of every homicide from act to judicial resolution. This offers a distinct perspective across the entire criminal justice landscape.

Since launch, the D.C. Witness team reported on more than 1,300 homicide cases in Washington, D.C., wrote stories and gathered data. The journalism was strong, but the website was clunky and the data a mess. The result: D.C. Witness was having little impact.

The team realized they needed a better way to manage and present the data. But this would require resources beyond the existing budget. So D.C. Witness applied for support from the Google News Initiative Innovation Challenge. D.C. Witness was selected by the GNI with the goal of reengineering their systems. The result was nothing short of a reincarnation.

The GNI process, which requires drawing up detailed project milestones, forced D.C. Witness to tear everything down, reviewing how each process worked, how and why. The team realized they were getting in their own way. They’d committed the cardinal journalist sin of falling in love with their own work, losing sight of its potential value and the audience it served.

Further proof came almost immediately after the database and website were relaunched. As court activity has picked up after the peak of the pandemic, D.C. Witness’s audience has been using new functions developed to provide readers with better, customized case information.

Data and reporting work on violence reduction programs called “violence interrupters” was also effective. D.C. politicians were promoting the programs, boosting funding by $10 million, but there had been neither evaluation nor oversight. The GNI-remade platform enabled D.C. Witness to provide the first public data showing the programs were not working as claimed, dispersing rather than reducing homicides. The resulting public outrage brought critical scrutiny. 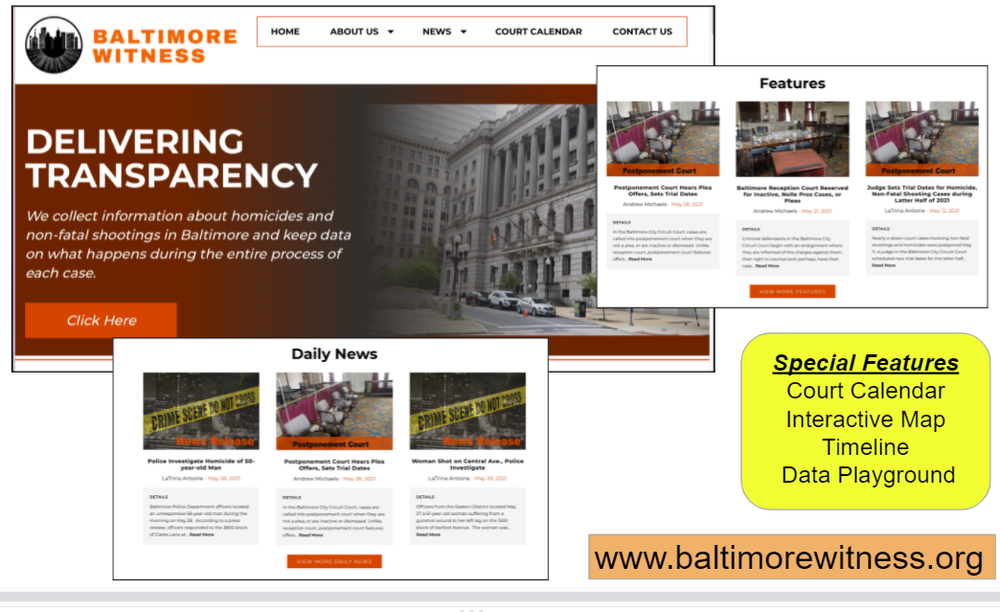 Having realized the impact that making the data visible was having, the team launched a second website out of Baltimore, MD. There, the court that dealt with violent felonies routinely held back crucial public case information. In response to Baltimore Witness reporting, the court changed its procedures making more information accessible to the public.

The new website has also brought success in viewership with its audience growing 50% month-over-month since its launch.

While GNI helped D.C. (and now Baltimore) Witness better understand how they can reach people and serve their communities, this is just the beginning for the reporting teams. Now, D.C. Witness and Baltimore Witness can focus on maximizing their impact for everyone’s benefit.