Today, we’re supporting the Clooney Foundation for Justice with a $1 million grant focused on education for refugee children in Lebanon. More than half of global refugees are under the age of eighteen, and in Lebanon, which is hosting the largest number of Syrian refugees per capita in the world, nearly half of those are Syrian refugee children who are currently out of school.

The Clooney Foundation for Justice is teaming up with SABIS, a global education network that has already taught many refugee children in Lebanon. SABIS is taking its accredited teaching methodology and making it accessible to more refugees in Lebanon by setting up semi-permanent schools in areas with a high concentration of refugee children. This grant will support expanding their efforts to develop a new school model, using digital tools, for up to 10,000 out-of-school children in Lebanon. Through our employee volunteering program, we’ll also provide technical expertise to help with everything from connectivity to cloud storage by having Googlers helping both on the ground and remotely.

This grant builds on our work with organizations who also support refugees in Germany, France, Turkey and Greece with access to education and learning opportunities. Collectively, our efforts across humanitarian assistance, connectivity and access to information and education will help more than 1 million refugees.

In October 2015, we granted NetHope $900,000, and our employees from around the world helped set up WiFi hotspots and charging kits at key transit points along the refugee route in Europe. So far, more than 300,000 refugees have been able to access NetHope’s WiFi to access vital information. Googlers also helped build the siteRefugeeInfo.eu with the International Rescue Committee, Mercy Corps, and others. The site is now accessible in 18 locations in Greece, Italy, Germany, Slovenia, Croatia and Serbia, and is being used more than 1,000 times a day.

We’re also working to help refugees in the United States get mobile connectivity by partnering with the International Rescue Committee to donate 1,000 Nexus devices and Project Fi wireless service to refugees in 24 cities across the country.

In January, together with NetHope, we launched “Project Reconnect” — an effort to to equip German NGOs with 25,000 Chromebooks that help refugees learn more about local languages, resources, and job opportunities. To date, more than half of them have been delivered and used by nonprofits in Germany. Last year, we also gave a grant to Libraries without Borders to send their Ideas Boxes to create safe learning and playing spaces for children in refugee camps. These Ideas Boxes have been visited thousands of times in camps from Lesbos and Athens in Greece to the refugee camp of Grande Synthe in France and in Düsseldorf, Germany. 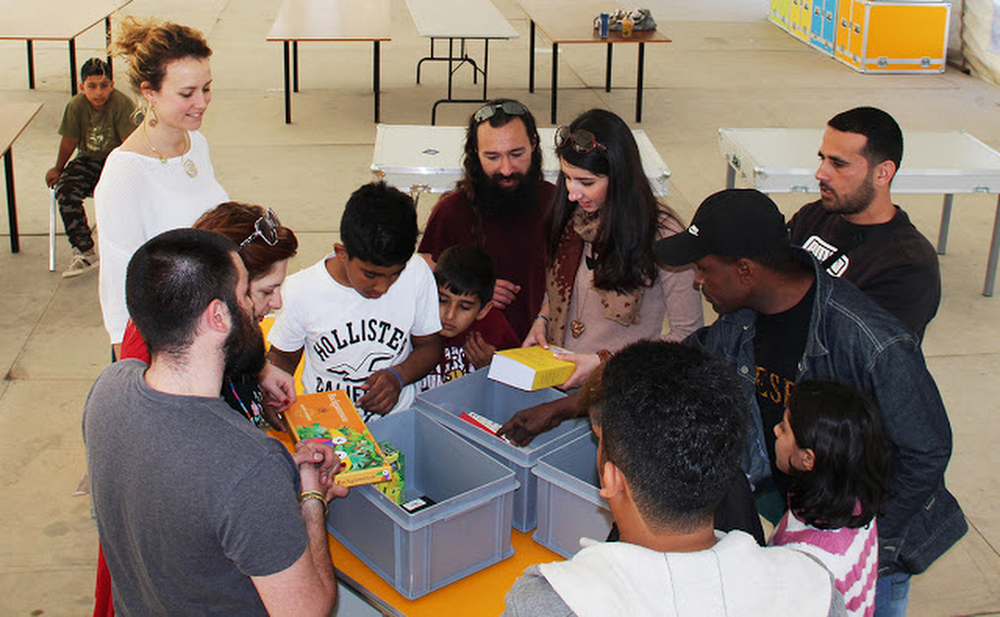 Discovering the resources of the Ideas Box in the Eleonas refugee camp, in Athens, Greece

A White House call to action

In June, we signed on as a founding partner of the White House’s Private Sector Call to Action for Refugees, an effort by the administration to bring together a cross-section of businesses to help make significant commitments that will have a measurable impact on refugees both in the United States and around the world. We’re participating in the conversation at the White House Summit on Refugees today in New York, and will continue to build on our efforts.

You can learn more about grantees and their work at google.org/refugees, and you can donate directly on our site and via the White House’s AidRefugees.gov.