Share
Twitter
Facebook
Linkedin
Mail
Copy link
Jacquelline Fuller
President, Google.org
Share
Twitter
Facebook
Linkedin
Mail
Copy link
When Walaa posted a picture on social media that spoke out against violence in his hometown of Jairoud, Syria, it earned him three months of violent detention. He fled the country with his family through Turkey and into Greece, where they now live in a refugee camp near the Macedonian border.

Though the Internet played a role in his flight from Syria, connectivity has played a crucial role in helping him rebuild his life in Greece. While living in Greek refugee camps, Walaa used YouTube to learn English, and his language skills are now so good that he’s served as a community advocate and translator. He says he’s far from done: next, he hopes to learn Greek.

As refugees across Europe adapt to new contexts, access to information and education are crucial to help them develop the skills they need. Last fall we encouraged you to donate to a public matching campaign to help refugees access not only basic humanitarian aid, but also resources to create a bridge to their new communities. Since then we’ve helped the International Rescue Committee build an online information hub for refugees, Mercy Corps develop Translation Cards to allow field workers to communicate across languages more easily, partner with NetHope to install low-cost WiFi in refugee camps, and support refugee education through Kiron, a nonprofit providing refugee-tailored university courses available both online and offline. 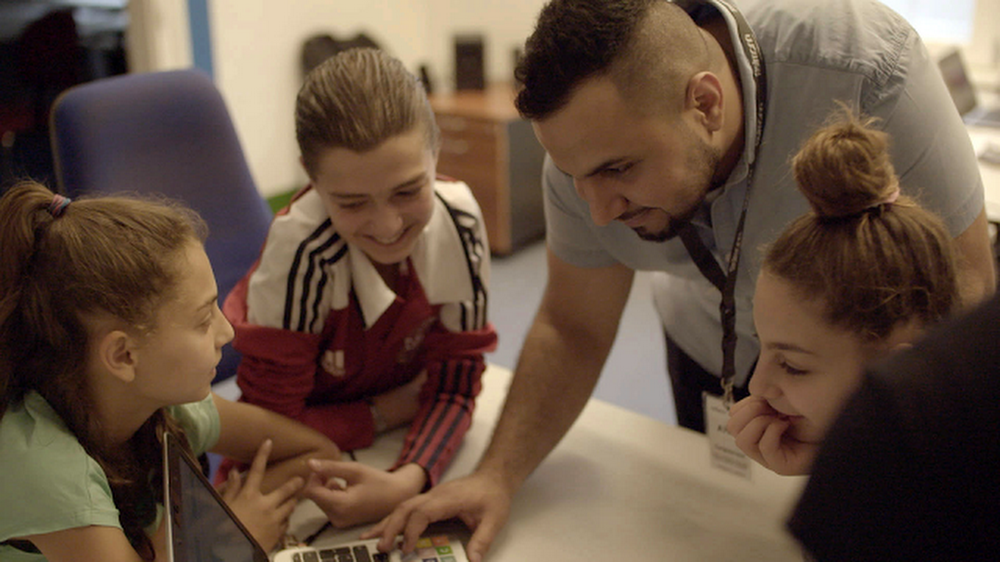 Ahmed giving CODE.org classes to young refugees through the Chromebooks in a refugee center in Berlin

In addition to Walaa, we’ve heard from other refugees who are finding ways to adjust thanks to Internet and education access. For example, Ahmed is an Iraqi computer scientist now living in Berlin. While waiting for his residence permit, he began teaching coding classes at refugee welcome centers as part of Project Reconnect, an initiative we launched with NetHope to equip NGOs with Chromebooks. Kashif, who traveled through seven countries from a small Pakistani town to Berlin, is studying online with Kiron and dreams of working as an engineer at NASA.

On World Refugee Day, we hope you’ll take time to hear stories of more refugees who are working so hard to rebuild their lives.

We also want to thank everyone across the globe who donated last year, and encourage you to continue to support our partners in their critical work. Though the impact of this refugee crisis will be felt for many years to come, we’ll continue to look for ways to contribute.