A lawsuit that ignores choice on Android and Google Play

We built Android to create more choices in mobile technology. Today, anyone, including our competitors, can customize and build devices with the Android operating system — for free.

We also built an app store, Google Play, that helps people download apps on their devices. If you don’t find the app you’re looking for in Google Play, you can choose to download the app from a rival app store or directly from a developer’s website. We don’t impose the same restrictions as other mobile operating systems do.

So it’s strange that a group of state attorneys general chose to file a lawsuit attacking a system that provides more openness and choice than others. This complaint mimics a similarly meritless lawsuit filed by the large app developer Epic Games, which has benefitted from Android’s openness by distributing its Fortnite app outside of Google Play.

Here’s more detail on how this lawsuit gets it wrong:

The complaint limits its definition of the app marketplace to Android devices only. This completely ignores the competition we face from other platforms such as Apple's incredibly successful app store, which accounts for the majority of mobile app store revenues according to third-party estimates. We compete for both developers and consumers, and if we’re not providing them with the best experience on Google Play, they have other alternatives to choose from.

This complaint alleges that consumers and developers have no option other than to use Google Play. But that’s not correct. Choice has always been a core tenet of Android. Device makers and carriers can preload competing app stores alongside Google Play on their devices. In fact, most Android devices ship with two or more app stores preloaded. And popular Android devices such as the Amazon Fire tablet come preloaded with a competitive app store and no Google Play Store. 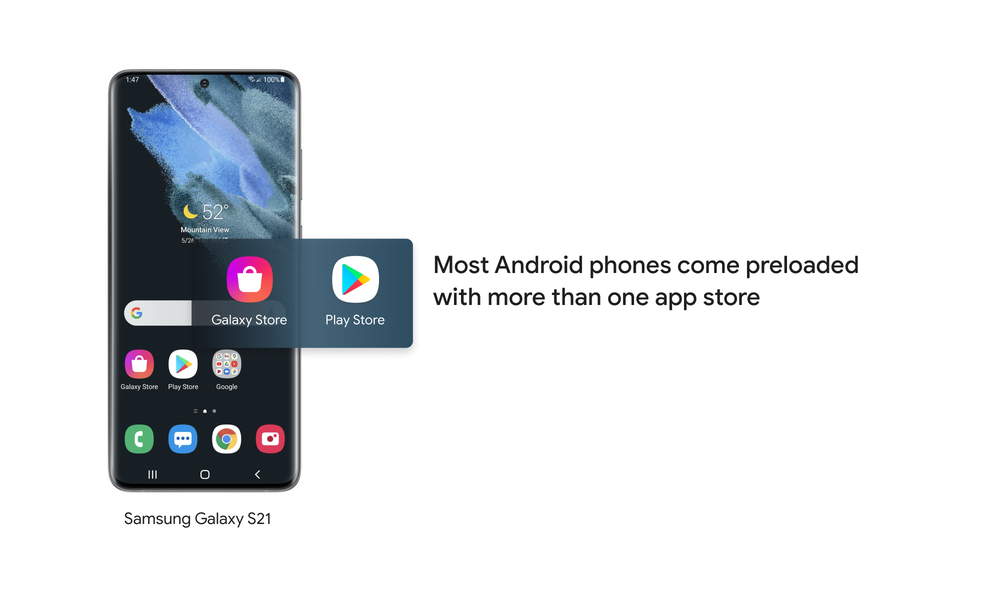 Consumers can also “sideload” apps, meaning they can download them from a developer’s website directly without going through Google Play at all. People sideload successful apps like Fortnite, as well as entire app stores like the Amazon Appstore, neither of which are distributed through Google Play.

The complaint suggests that Google Play somehow inhibits developers’ ability to grow. Even though developers have a range of distribution options on Android, we’re proud that, as of February 2020, developers had earned over $80 billion through Google Play. And in 2020, the Android app economy, including Google Play, helped create nearly 2 million American jobs. 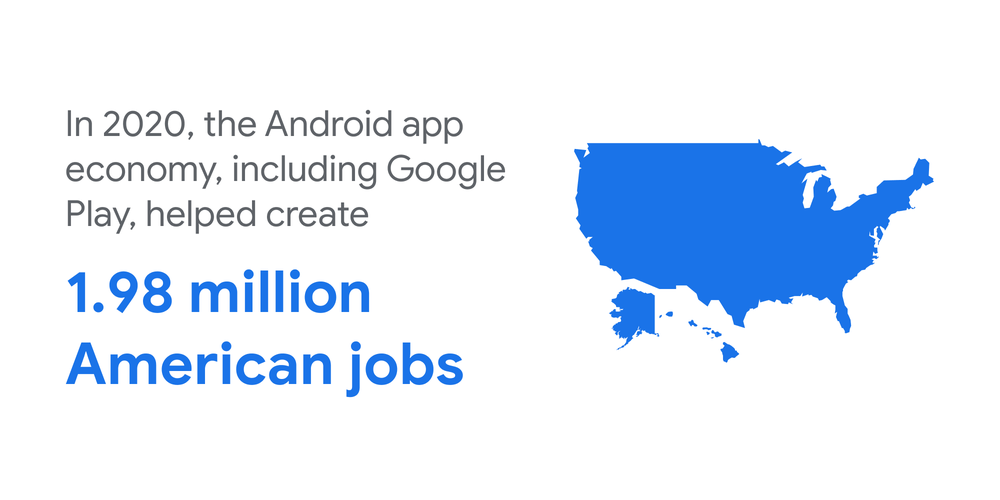 The economic model of Play and Android benefits developers

The complaint is peppered with inflammatory language designed to distract from the fact that our rules on Android and Google Play benefit consumers. We stand behind apps distributed on Google Play, so we do have some rules to keep the store secure, protect privacy and prevent fraud. For example, we have rules around spam, app reviews and inappropriate content. These rules don't harm consumers; they help protect their safety and security. People want and expect this when using their phones.

Under our Google Play billing policy, the 3% of developers who actually sell digital products or content use Google Play’s billing system and are subject to a progressive service fee: 15% on the first $1 million earned (99% of developers who pay any fee earn less than a million dollars), and then 30% for earnings above $1 million. Some large app developers, like Epic, want preferential rates and want to use their own payment processing system, but that would harm the ecosystem as a whole. 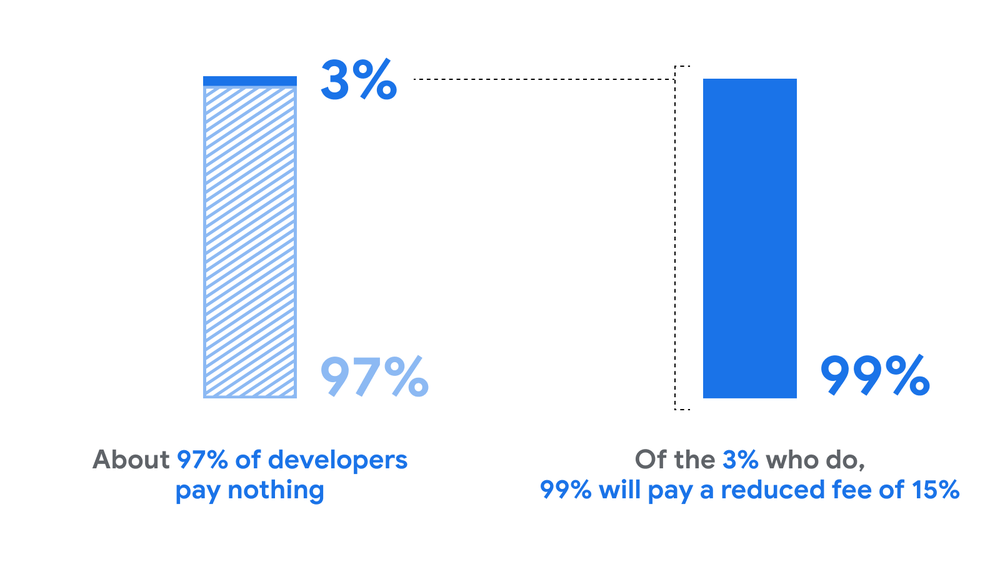 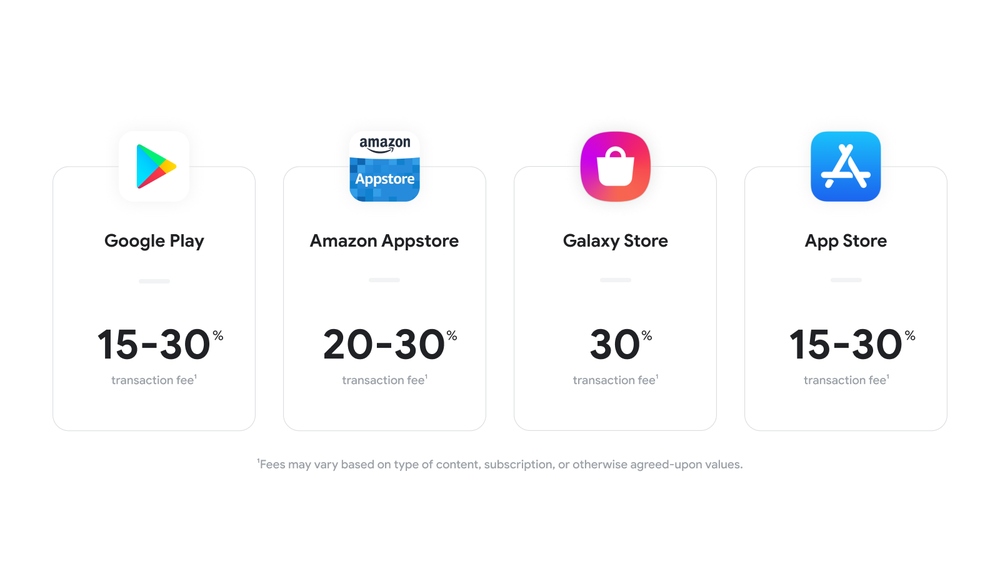 Even with these rules, it’s worth reiterating: Developers who don’t like our policies can still distribute their apps to Android users directly or through rival app stores without using our billing system or paying us a cent — and many do.

We understand that scrutiny is appropriate, and we’re committed to engaging with regulators. But Android and Google Play provide openness and choice that other platforms simply don’t. This lawsuit isn’t about helping the little guy or protecting consumers. It’s about boosting a handful of major app developers who want the benefits of Google Play without paying for it. Doing so risks raising costs for small developers, impeding their ability to innovate and compete, and making apps across the Android ecosystem less secure for consumers.