Today, we launched a new Google Labs product called Google Earth Engine at the International Climate Change Conference in sunny Cancun, Mexico. Google Earth Engine is a new technology platform that puts an unprecedented amount of satellite imagery and data—current and historical—online for the first time. It enables global-scale monitoring and measurement of changes in the earth’s environment. The platform will enable scientists to use our extensive computing infrastructure—the Google “cloud”—to analyze this imagery. Last year, we demonstrated an early prototype. Since then, we have developed the platform, and are excited now to offer scientists around the world access to Earth Engine to implement their applications.

Why is this important? The images of our planet from space contain a wealth of information, ready to be extracted and applied to many societal challenges. Scientific analysis can transform these images from a mere set of pixels into useful information—such as the locations and extent of global forests, detecting how our forests are changing over time, directing resources for disaster response or water resource mapping.

The challenge has been to cope with the massive scale of satellite imagery archives, and the computational resources required for their analysis. As a result, many of these images have never been seen, much less analyzed. Now, scientists will be able to build applications to mine this treasure trove of data on Google Earth Engine, providing several advantages:

Google Earth Engine can be used for a wide range of applications—from mapping water resources to ecosystem services to deforestation. It’s part of our broader effort at Google to build a more sustainable future. We’re particularly excited about an initial use of Google Earth Engine to support development of systems to monitor, report and verify (MRV) efforts to stop global deforestation.

Deforestation releases a significant amount of carbon into the atmosphere, accounting for 12-18% of annual greenhouse gas emissions. The world loses 32 million acres of tropical forests every year, an area the size of Greece. The United Nations has proposed a framework known as REDD (Reducing Emissions from Deforestation and Forest Degradation in Developing Countries) that would provide financial incentives to tropical nations to protect their forests. Reaching an agreement on early development of REDD is a key agenda item here in Cancun.

Today, we announced that we are donating 10 million CPU-hours a year over the next two years on the Google Earth Engine platform, to strengthen the capacity of developing world nations to track the state of their forests, in preparation for REDD. For the least developed nations, Google Earth Engine will provide critical access to terabytes of data, a growing set of analytical tools and our high-performance processing capabilities. We believe Google Earth Engine will bring transparency and more certainty to global efforts to stop deforestation.

We’ve been working with several partners to fully develop this platform. In particular, the Gordon and Betty Moore Foundation has been a key strategic and funding partner. The Moore Foundation has also committed over $12 million dollars through its Environmental Conservation Program to projects that support the development of Google Earth Engine. The Moore Foundation’s Environment Program finances practical, enduring solutions to environmental challenges and works to improve the way society uses and manages important terrestrial, freshwater, and coastal marine ecosystems to create working land and seascapes that support resilient and productive ecosystems for current and future generations. They’ve funded the U.S. Geological Survey to scale their infrastructure and accelerate bringing historic Landsat data off tape, and online, through Google Earth Engine.

Support from the Moore Foundation includes funding for several scientists to develop and integrate their desktop software to work online with the data available in Google Earth Engine. Those scientists -- Greg Asner of the Carnegie Institution for Science and Carlos Souza of Imazon -- are also key partners, along with Matt Hansen of the Geographic Information Science Center at South Dakota State University. All are at the cutting edge of forest monitoring in support of climate science.

In collaboration with Matt Hansen and CONAFOR, Mexico’s National Forestry Commission, we’ve produced a forest cover and water map of Mexico. This is the finest-scale forest map produced of Mexico to date. The map required 15,000 hours of computation, but was completed in less than a day on Google Earth Engine, using 1,000 computers over more than 53,000 Landsat scenes (1984-2010). CONAFOR provided National Forest Inventory ground-sampled data to calibrate and validate the algorithm. 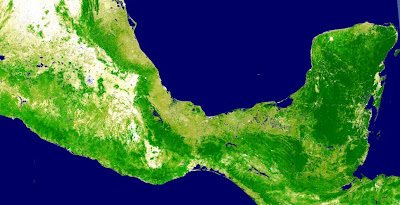 A forest cover and water map of Mexico (southern portion, including the Yucatan peninsula), produced in collaboration with scientist Matthew Hansen and CONAFOR.

We hope that Google Earth Engine will be an important tool to help institutions around the world manage forests more wisely. As we fully develop the platform, we hope more scientists will use new Earth Engine API to integrate their applications online—for deforestation, disease mitigation, disaster response, water resource mapping and other beneficial uses. If you’re interested in partnering with us, we want to hear from you—visit our website! We look forward to seeing what’s possible when scientists, governments, NGO’s, universities, and others gain access to data and computing resources to collaborate online to help protect the earth’s environment.

Update on 12/6: Additional information on the Moore Foundation, Google Earth Engine’s Landsat archive, and the Congo Basin Water Map have been added to the post.