Device security is of paramount importance to enterprises. It’s why the Android Security team (and many other teams at Google) continuously work to improve protections across more than 2 billion active Android devices.

To ensure customers, partners, and Android users are up to date on our ongoing work, we recently published the fourth annual Android Security Year in Review. This document details improvements to Google’s security offerings in Android, updated platform features, and key metrics that inform our initiatives.

While the report provides a broad view of the breadth of the security work across the ecosystem, there are important highlights for our enterprise users. 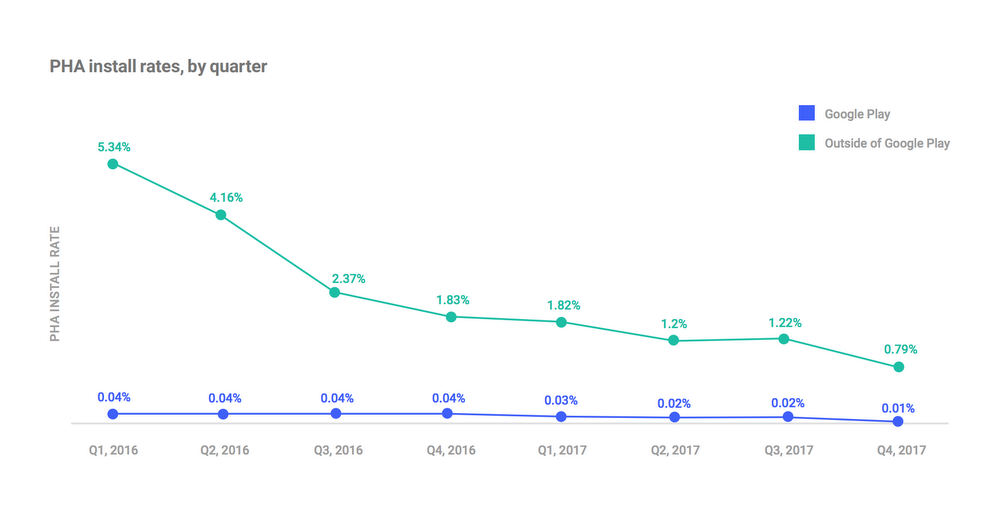 The installation of potentially harmful apps (PHAs) from outside the Google Play store saw a significant drop in 2016.

We also introduced a bundle of new security features in Android Oreo, making it safer to get apps, dropping insecure network protocols, providing more user control over identifiers, and hardening the kernel.

Additionally we launched zero-touch enrollment, a fast and secure method for simplified provisioning of corporate-distributed devices. Our focus on security starts from the moment a device is powered on, through deployment, and during daily interaction with apps and services.

Our efforts continue into 2018. We recently launched the Android Enterprise Recommended program for OEMs, which addresses the pain point that many organizations face when choosing devices for large deployments. Our program features a curated selection of devices that meet common requirements for security (including which devices are getting regular security patches), and supported features, all validated by Google.

For a more detailed look at all of the Android security improvements during the last year, see the dedicated Security Blog or read the full security report at g.co/AndroidSecurityReport2017.