Ask a Techspert: What’s that weird box next to my emoji?

A few months ago, I received a message from a friend that, I have to confess, made absolutely no sense. Rows of emoji followed by different boxes — like this 􏿿􏿿􏿿􏿿􏿿􏿿 — appeared…so I sent back a simple “huh?” Apparently she’d sent me a string of emoji that were meant to tell me about her weekend and let’s just say that it was all lost in translation.

To find out exactly what caused our communication breakdown, I decided to ask emoji expert Jennifer Daniel.

Why did the emoji my friend typed to me show up as 􏿿􏿿􏿿􏿿􏿿􏿿 ?

Oy boy. No bueno. Sounds like your friend was using some of the new emoji that were released this month. (Not to rub it in but they are so good!!! There’s a salute 🫡, a face holding back tears, 🥹 and another face that’s melting 🫠!) Sadly, you’re not the only one who’s losing things in translation. For way too long, 96% of Android users couldn’t see emoji released the year they debuted.

And it isn't just an Android problem: Despite being one of the earliest platforms to include emoji, Gmail received its first emoji update since 2016 last year! (You read that right: Two-thousand-sixteen!) This often resulted in skin toned and gendered emoji appearing broken.

A few examples of "broken" skin tone and gendered emoji.

Yeah, strong agree. Historically, emoji have been at the mercy of operating system updates. New OS? New emoji. If you didn’t update your device, it meant that when new emoji were released, they would display as those black boxes you saw, which are referred to as a “tofu.” It gets worse: What if your phone doesn’t offer OS updates? Well, you’d have to buy a newer phone. Maybe that’d be worth it so you can use the new finger heart emoji (🫰)???

Emoji are fundamental to digital communication. Meanwhile, there is a very real economic divide between people who can afford to get a new phone every year (or who can afford a fancy phone that generously updates the OS) and everyone else in the world. That is absurd and I personally hate it. Now for the good news: Check your phone, I bet you can see the emoji from your friend’s message today.

Whaaaaat! You’re right. Why can I see them now but I couldn’t a few months ago?

What does “decoupled” emoji updates mean?

It basically means emoji can be updated on your phone or your computer without you updating your operating system. As of this month, all apps that use Appcompat (a tool that enables Android apps to be compatible with several Android versions) will automatically get the latest and greatest emoji so you can send and receive emoji even if you don’t have the newest phone. And this will work across Google: All 3,366 emoji will now appear in Gmail, on Chrome OS and lots of other places when people send them to you. Apps that make their own emoji rather than defaulting on the operating system may find themselves falling behind as taking on the responsibility of maintaining and distributing emoji is a lot of work. This is why we're so thrilled to see Google rely on Noto Emoji so everyone can get the latest emoji quickly.

Since you mentioned Gmail being an early emoji adopter, it makes me wonder…how old are emoji? Where do they come from?

A volunteer-based organization called the Unicode Consortium digitizes the world’s languages. They’re the reason why when you send Hindi from one computer the computer on the other end can render it in Hindi. In their mission to ensure different platforms and operating systems can work together, they standardize the underlying technology that Google, Apple, Twitter and others use to render their emoji fonts.

You see, emoji are a font. That’s right. A font. I know. They look like tiny pictures but they operate the same way any other letter of the alphabet does when it enters our digital realm. 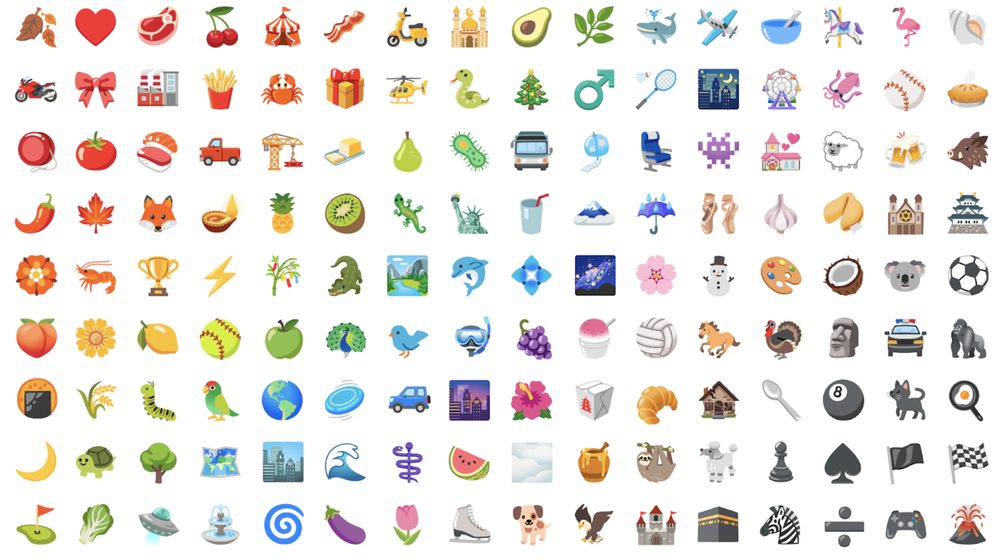 A variety of the new emoji designs that are now visible across Google products including Gmail, Google Chat, YouTube Live Chat and Chrome OS.

So, the Unicode Consortium makes fonts?

No, they manage a universal character encoding set that written languages map to. Google's Noto project is a global font project to support those existing scripts and languages. Google uses Noto Emoji and provides resources to ensure your emoji render on Android and in desktop environments including metadata like iconography and shortcodes too! All Google chat products now support this.

We’re also working on ways for you to download or embed Noto Emoji into your website of choice via fonts.google.com. So, stay tuned 😉.

Emoji are a font. Black boxes are tofus. The more you know! I guess I have one final question: Now that I can send (and see!) the melting face emoji, will it look identical no matter who I send it to?

Well, every emoji font has its own flavor. Some of these design variations are minor and you might not even notice them. With others, primarily the smilies (😆🤣🥲), the details really matter — people are hardwired to read micro-expressions! The last thing anyone wants is an emoji you see as a smile and someone else sees as a downward smirk — it can ruin friendships! Fortunately, over the past three years designs have converged, so there’s less chance of being misunderstood 🌈.

Polishing up emoji and making them easier to share

What does World Emoji Day look like without new emoji?