The Google Play store, coming to a Chromebook near you

We launched Chromebooks for people who wanted a fast, simple and secure computing experience. Chromebooks just work -- open the lid, and within seconds, you’re on your favorite sites and apps, getting stuff done. Virus protection and automatic updates are built-in, so you don't have to manage your computer. And that’s worked great for our users. Schools in the US are now buying more Chromebooks than all other devices combined — and in Q1 of this year, Chromebooks topped Macs in overall shipments to become the #2 most popular PC operating system in the US*.

We’ve been encouraged by this growth, but our users have often told us that they would like to do even more with their Chromebooks — run more apps, use Office files more easily, connect with a variety of apps, and do more when they’re offline.

So, we're bringing Google Play (the most popular app store in the world) to Chromebooks. This means you’ll be able to download and use Android apps, so you can make a Skype call, work with Office files and be productive offline — or take a break with games like Minecraft, Hearthstone or Clash of Clans. The same apps that run on phones and tablets can now run on Chromebooks without compromising their speed, simplicity or security. This is good for users and great for developers — in addition to phones and tablets, they will be able to easily bring their apps to laptops. And all this is built on top of Chrome OS, so users will continue to have everything they love in their Chromebooks. 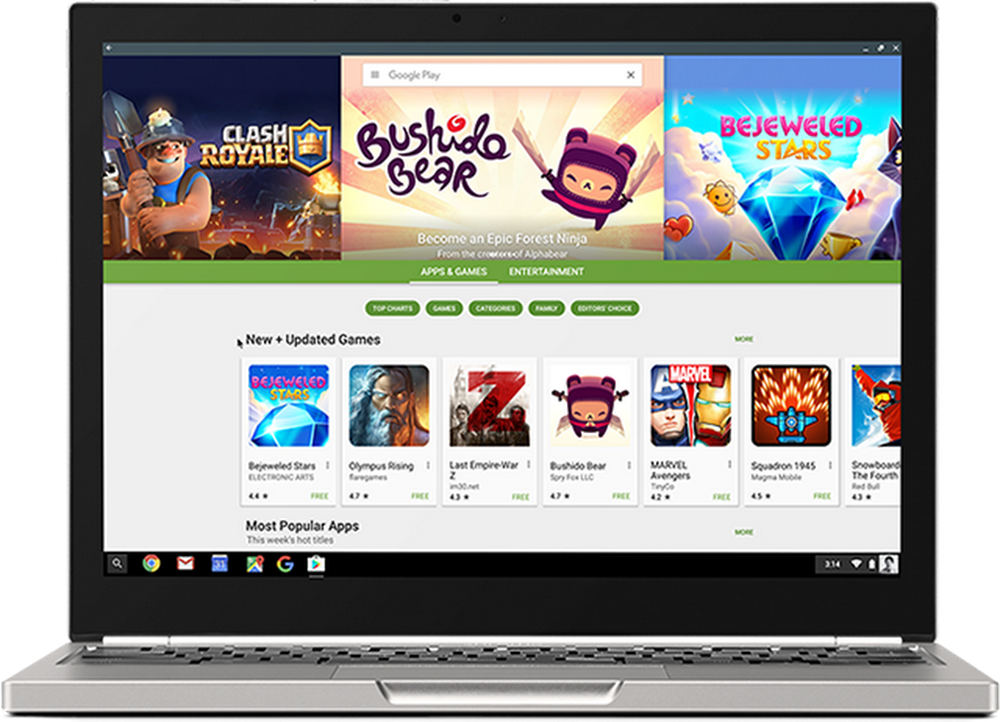 Google Play will start rolling out in the developer channel with M53 on the ASUS Chromebook Flip, the Acer Chromebook R 11 and the latest Chromebook Pixel. Over time, this will roll out to other Chromebooks in the market too. And, we've also been working with our partners to launch some great new devices specially designed for Play. Stay tuned for more details to come over the next few months.

Chromebooks have always been about making computing more accessible for everyone, and by bringing together the best of Android and Chrome OS, we are taking a big leap forward. Not only are we addressing many of the existing needs and use cases that people have for their Chromebooks, we are also betting on the millions of developers who are innovating every day to build the next great experience that wasn’t even possible on PC platforms before. This is just the beginning, and we’re excited to see what the future holds for everyone!