After school, this teen tracks climate change with NASA

Editor's Note: Liza Goldberg is a 17-year-old scientist interning at NASA Goddard Space Flight Center’s Biospheric Sciences Lab. Today, she shares how Google Earth Engine helps her monitor mangroves, which are ecosystems vital to the sustainability of coastal communities around the world.

I first heard the words “climate change” when I was 9. As a fourth-grade student in Maryland, my class studied the local Chesapeake Bay; we raised horseshoe crabs and observed the effects of extreme weather and sea level rise on the ecosystem. After studying the human-environment interactions in my community and the broader region, I decided I wanted to dedicate my life to curbing climate change.

Two years later, I began a science fair project to study the impacts of simulated warming on the carbon dioxide exchange of red maple saplings. Every weekend for three years, I used a gas analyzer to test eight trees I planted in my backyard, and submitted the project to a local fair. I explained my research to a judge, who connected me with scientists in NASA Goddard Space Flight Center’s Biospheric Sciences Lab. Thanks to that connection, I went from testing saplings in my backyard to working with a world-renowned team of forest change scientists at age 14. 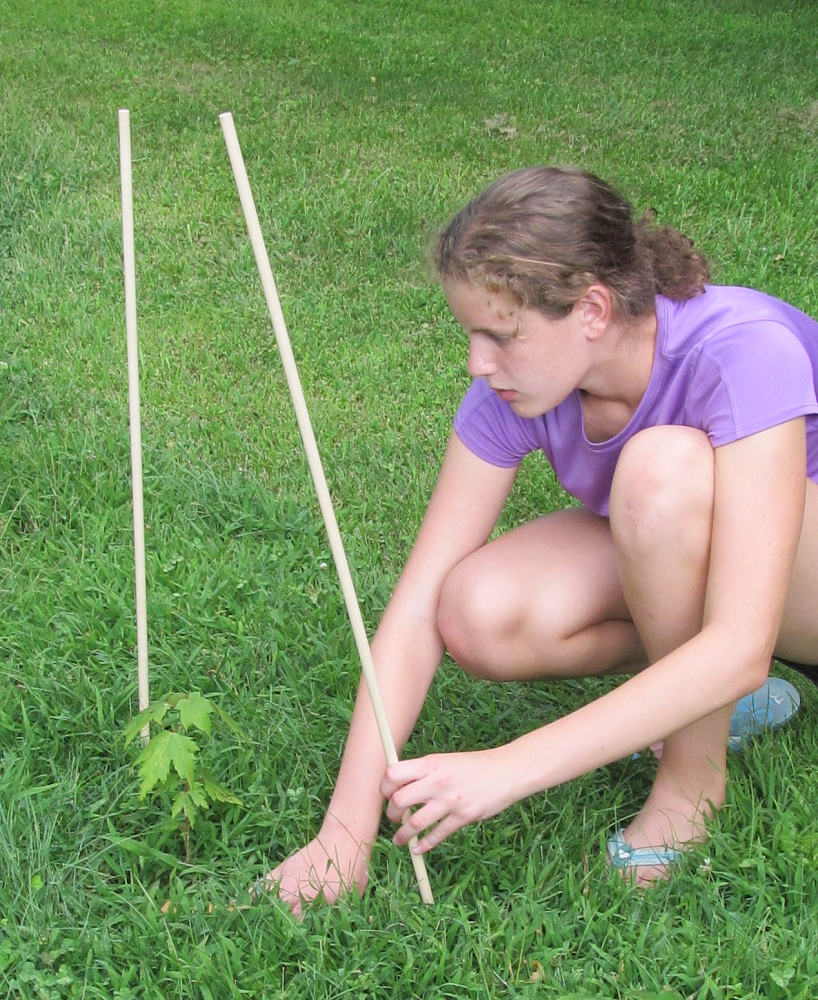 Building the artificial warming chambers for my science project in my backyard.

My research group studies mangrove forests, which are vital coastal ecosystems that buffer infrastructure during extreme weather and support local fisheries. When I first began my internship at NASA in 2016, I had never heard of mangroves or learned about the scope of global forest losses, but I began reading news articles about a series of widespread mangrove losses occurring in the Gulf of Carpentaria in Australia. Thousands of hectares of forests died that year, and scientists didn’t gain a complete understanding of what caused the devastation until much later. I decided to build a program that could use satellite imagery to monitor the location and drivers of mangrove loss, potentially helping to prevent another large-scale dieback in the future.

Google Earth Engine provided me with the scope of datasets and computing power necessary to analyze forest change on a global scale. I began my project at NASA with no knowledge of satellites or image processing, but guidance from my mentors, Dr. David Lagomasino and Dr. Lola Fatoyinbo, and my intensive studying of the Earth Engine developer resources helped me move from endless notes and plans to actual working code.

In mapping past global mangrove losses and drivers, we used long-term Landsat satellite imagery to identify regions of disturbance. Machine learning algorithms helped to identify where mangroves were converted to urban regions, agriculture, aquaculture or mudflats. Using the Earth Engine Apps interface, we’re working towards making our data both openly accessible and widely understandable for users of any background. Communicating our results at a comprehensible level is arguably as important as the science itself, as the ultimate goal of the project is to deliver our data to mangrove-reliant communities on the ground.

The beginning stages of EcoMap, a global mangrove loss and vulnerability system

We’re currently working with conservationists and researchers at The Everglades Foundation to use our mangrove loss driver data to understand the impacts of sea level rise and hurricanes in Everglades National Park. In the future, we also aim to provide coastal communities in East Africa with the real-time loss and loss driver data necessary to sustainably manage and conserve local forests.

My story is just one example of the impact of mentorship and resources on research development, regardless of age. I entered my NASA project with a set of seemingly unattainable goals, and the combination of my mentors’ guidance and Earth Engine’s power helped to make them reality. As this field progresses, I am excited to continue using Earth Engine as a means of monitoring a changing planet and balancing its needs with those of society.