A bigger piece of the pi: Finding the 100-trillionth digit

The 100-trillionth decimal place of π (pi) is 0. A few months ago, on an average Tuesday morning in March, I sat down with my coffee to check on the program that had been running a calculation from my home office for 157 days. It was finally time — I was going to be the first and only person to ever see the number. The results were in and it was a new record: We’d calculated the most digits of π ever — 100 trillion to be exact.

Calculating π — or finding as many digits of it as possible — is a project that mathematicians, scientists and engineers around the world have worked on for thousands of years, myself included. The well-known approximation 3.14 is believed to have been found by Archimedes around the year 250 BCE. Computer scientist Donald Knuth wrote "human progress in calculation has traditionally been measured by the number of decimal digits of π" in his book “The Art of Computer Programming” (Dr. Knuth even wrote about me in the book). In the past, people would manually — meaning without calculators or computers — determine the digits of pi. Today, we use computers to do this calculation, which helps us learn how much faster they’ve become. It’s one of the few ways to measure how much progress we're making across centuries, including before the invention of electronic computers. 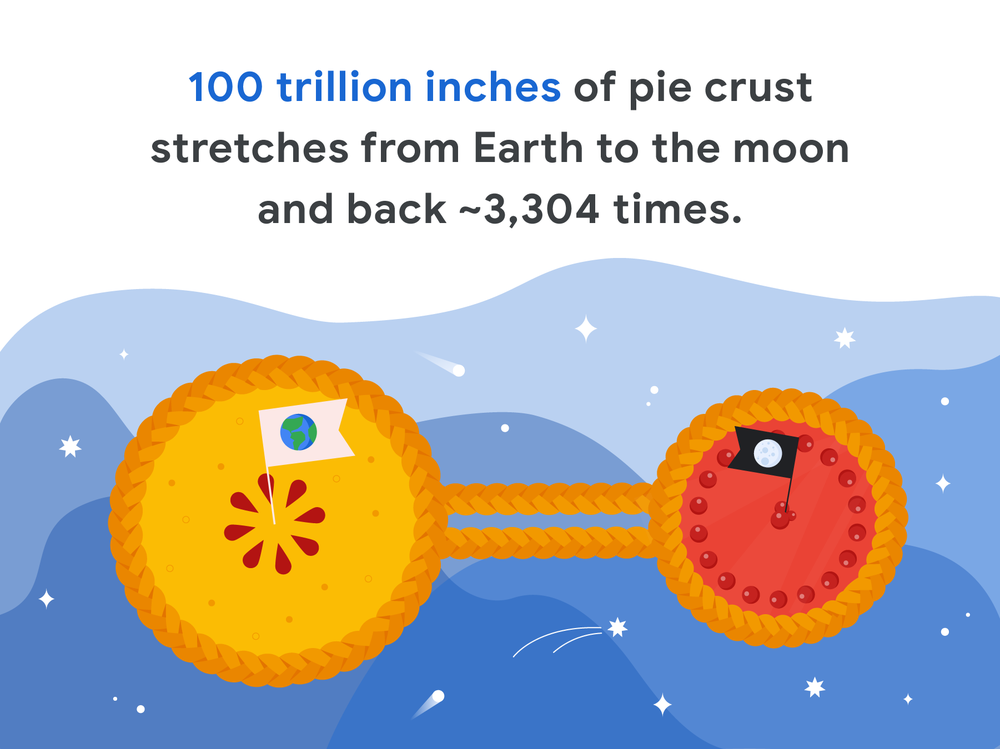 As a developer advocate at Google Cloud, part of my job is to create demos and run experiments that show the cool things developers can do with our platform; one of those things, you guessed it, is using a program to calculate digits of pi. Breaking the record of π was my childhood dream, so a few years ago I decided to try using Google Cloud to take on this project. I also wanted to see how much data processing these computers could handle. In 2019, I became the third woman to break this world record, with a π calculation of 31.4 trillion digits.

But I couldn’t stop there, and I decided to try again. And now we have a new record of 100 trillion decimal places. This shows us, again, just how far computers have come: In three years, the computers have calculated three times as many numbers. What’s more, in 2019, it took the computers 121 days to get to 31.4 trillion digits. This time, it took them 157 days to get to 100 trillion — more than twice as fast as the first project. 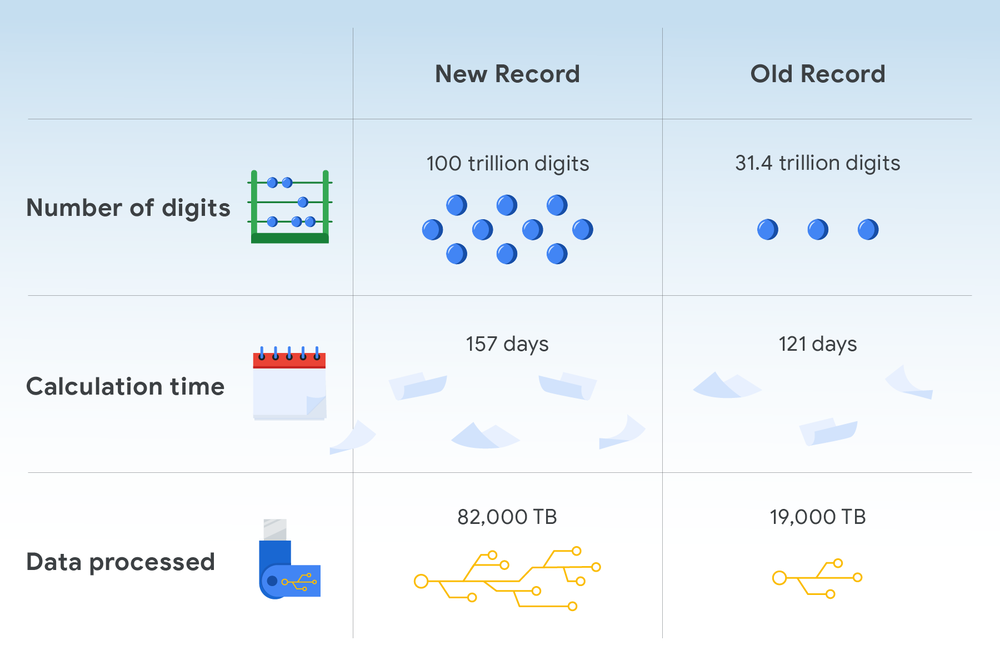 But let’s look back farther than my 2019 record: The first world record of computing π with an electronic computer was in 1949, which calculated 2,037 decimal places. It took humans thousands of years to reach the two-thousandth place, and we've reached the 100 trillionth decimal just 73 years later. Not only are we adding more digits than all the numbers in the past combined, but we're spending less and less time hitting new milestones. 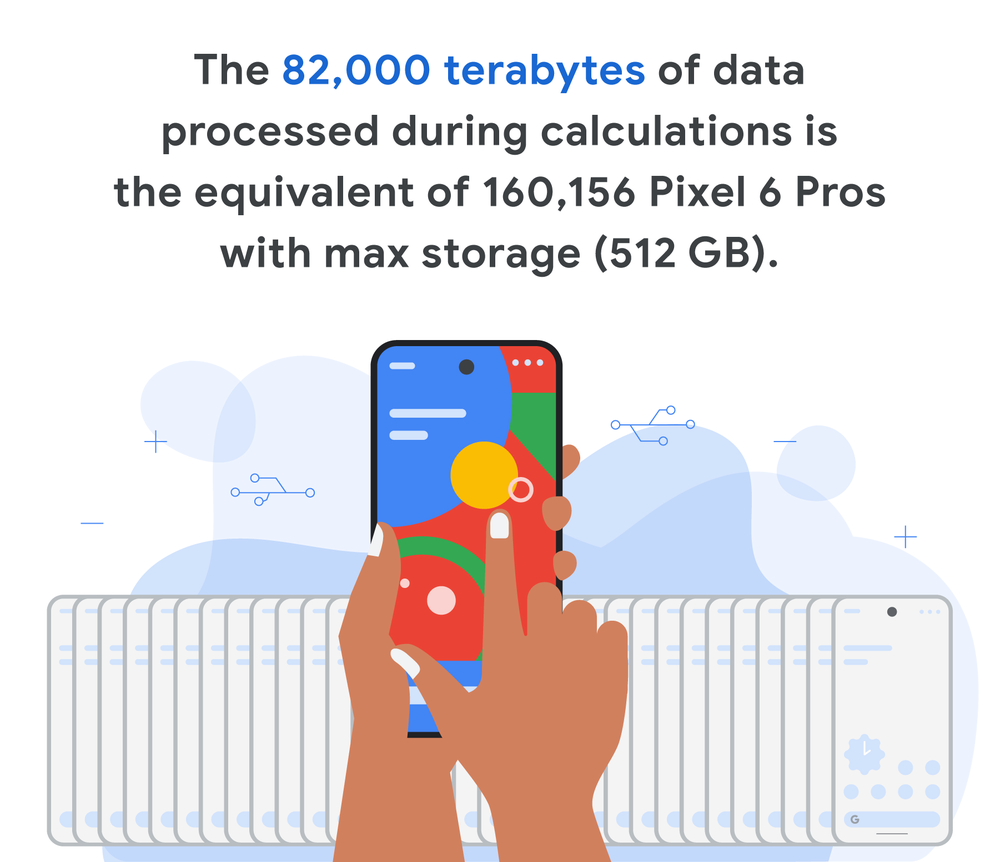 I used the same tools and techniques as I did in 2019 (for more details, we have a technical explanation in the Google Cloud blog), but I was able to hit the new number more quickly thanks to Google Cloud’s infrastructure improvements in compute, storage and networking. One of the most remarkable phenomena in computer science is that every year we have made incremental progress, and in return we have reaped exponentially faster compute speeds. This is what’s made a lot of the recent computer-assisted research possible in areas like climate science and astronomy. 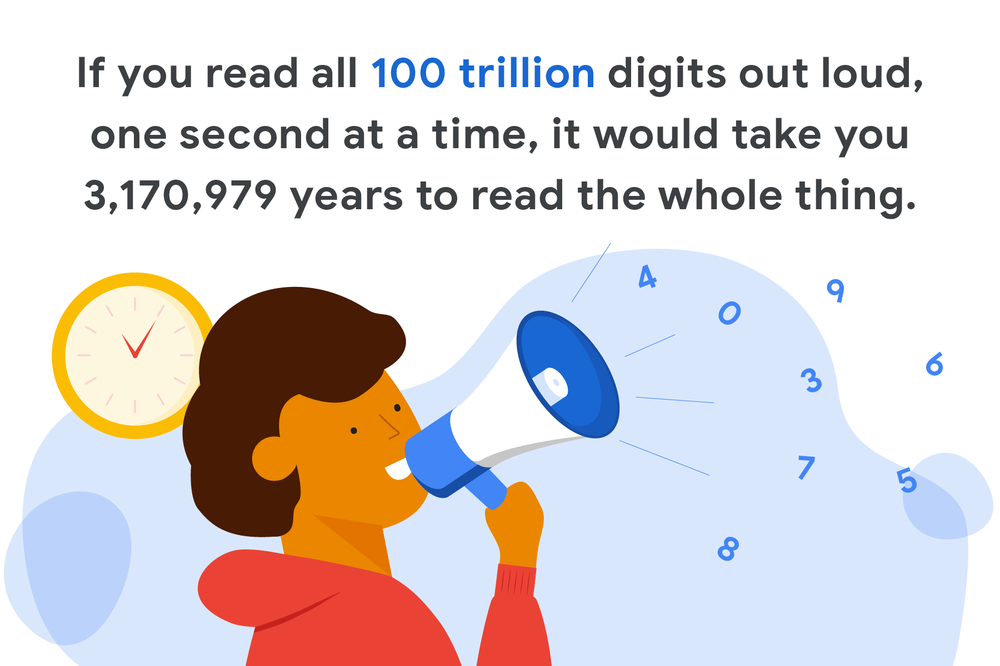 Back when I hit that record in 2019 — and again now — many people asked "what's next?" And I’m happy to say that the scientific community just keeps counting. There's no end to π, it’s a transcendental number, meaning it can't be written as a finite polynomial. Plus, we don't see an end to the evolution of computing. Like the introduction of electronic computers in the 1940s and discovery of faster algorithms in the 1960-80s, we could still see another fundamental shift that keeps the momentum going.