Japan’s political candidates hang out with voters on Google+

Yesterday, the heads of Japan’s eight most popular political parties held eight consecutive Google+ Hangouts to engage with citizens across the country ahead of Sunday’s general election—arguably the largest (and longest) series of Hangouts with politicians ever! Each of the leaders held a Hangout, including incumbent Prime Minister Yoshihiko Noda from the Democratic Party Japan and Shinzo Abe from the Liberal Democratic Party.

Voters asked questions that reflected the most pressing issues on the Japanese people’s minds: the ailing economy, social security and the future of energy programs. For instance, one 21-year old student asked a politician about welfare and economic self-reliance, in response to which the politician explained his vision to create more opportunities for young people. 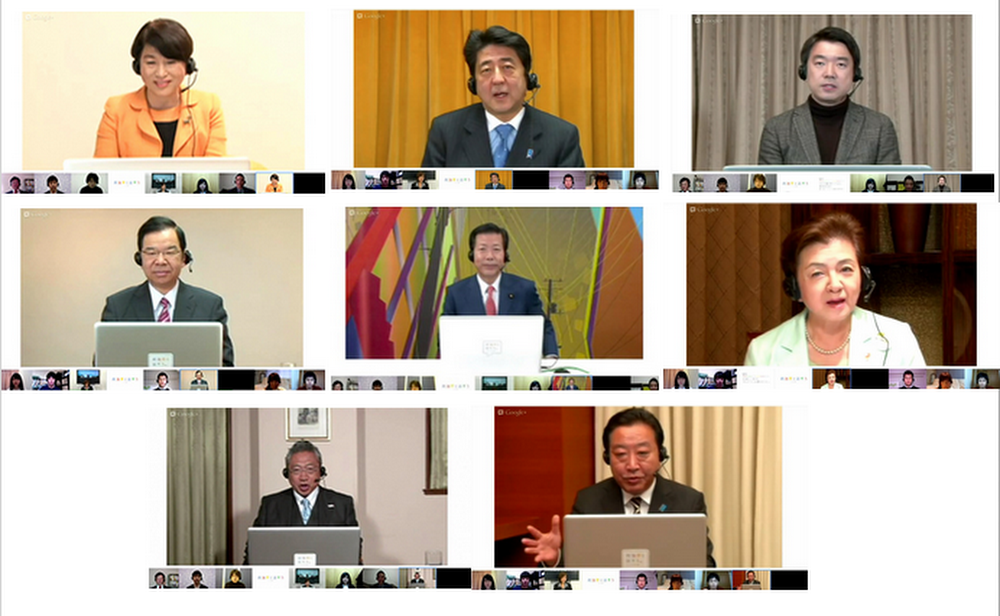 After announcing these Hangouts on November 29, we invited citizens to upload their questions on to Google+ using the hashtag #政治家と話そう (“talk to politicians”). Ten participants representing a cross-section of voters across Japanese society—including a college student from Tokyo, a housewife from Mie prefecture, and a businessman from Shizuoka prefecture—were chosen to join the Hangouts. People who tuned in said that it gave them a chance to witness an in-depth conversation between politicians and voters up close, which is rare in Japan’s incredibly short and intense campaign season of 12 days.

These Hangouts are part of Google Japan’s effort to help voters get information about the candidates before they head to the polls on December 16. To help voters get access to information about more than 1,000 candidates and 12 political parties, we launched our Japan elections site, called Erabou 2012 (“Choose 2012”), at google.co.jp/senkyo. This site serves as a hub for all latest elections-related information, pulling together candidate profiles and party platforms. If you missed the Hangouts live, you can also watch the recordings there and on the Japan Politics YouTube Channel.