Walk like an Egyptian with Street View in Google Maps

Candlelight flickering on a stone wall covered in hieroglyphs. A proud queen brought low by the bite of a snake. Reeds rustling along a river, waiting to be turned into papyrus, or maybe a basket. The civilization of ancient Egypt stood for thousands of years and left behind a rich legacy of architecture, art, medicine, politics, culture and more. Today, it looms large in our imagination as the home of Cleopatra, Ptolemy, Tutankhamun, people who worshipped cats as gods and buried their embalmed dead in tombs filled with treasures and sustenance for the afterlife.

Now the Egypt of your imagination can be brought to life with new Street View imagery in Google Maps, and you can take a virtual walk among the stunning monuments and rich history of this ancient civilization.

Start where most tourists do: at the Pyramids of Giza, which rise from the vast expanse of the Sahara like man-made mountains. Just kilometers from the bustling, modern city of Cairo, the Pyramids have stood for nearly 5,000 years, a testament to the ingenuity and ambition of the ancient Egyptian people.

The Giza Necropolis is one of the most famous archaeological sites in the world, and is home to the last standing wonder of the ancient world: the Great Pyramid. Built as a tomb and a symbol of eternity for the Pharoah Khufu, it stands 139 meters high (the height of the world’s highest roller coaster!) and was the tallest man-made structure on Earth for 3,800 years. Look beyond it to the west, and you’ll see the pyramids of Khafre and Menkaure, built by Khufu's son and grandson. 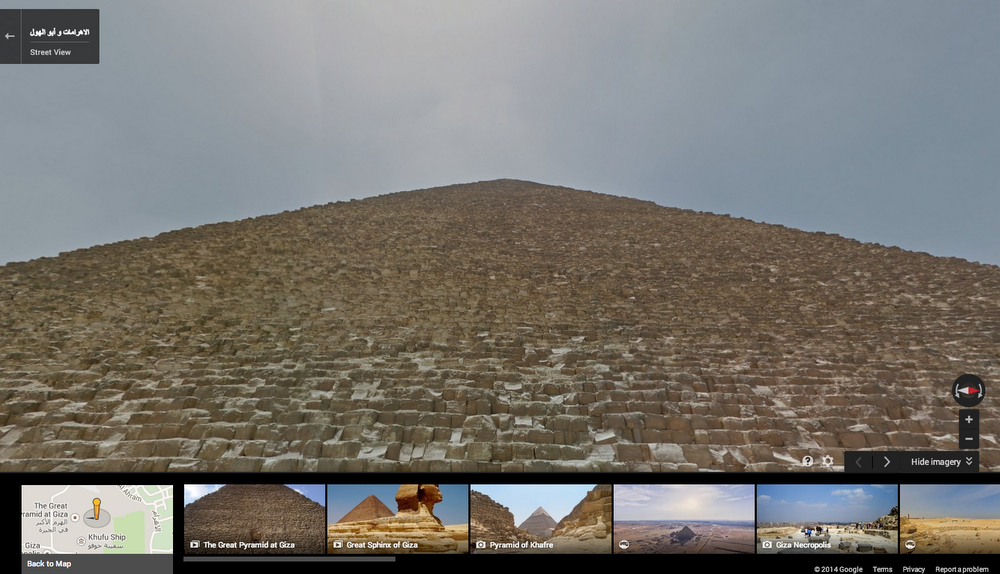 Now turn east to the Great Sphinx, the oldest and largest known monumental sculpture in the world. With the body of a lion and the head of a human, it measures a grand 73 meters long and 20 meters high. Literally translating to “Father of Dread,” this mythical creature is believed to resemble Pharaoh Khafre, who was the ruler at the time of construction. 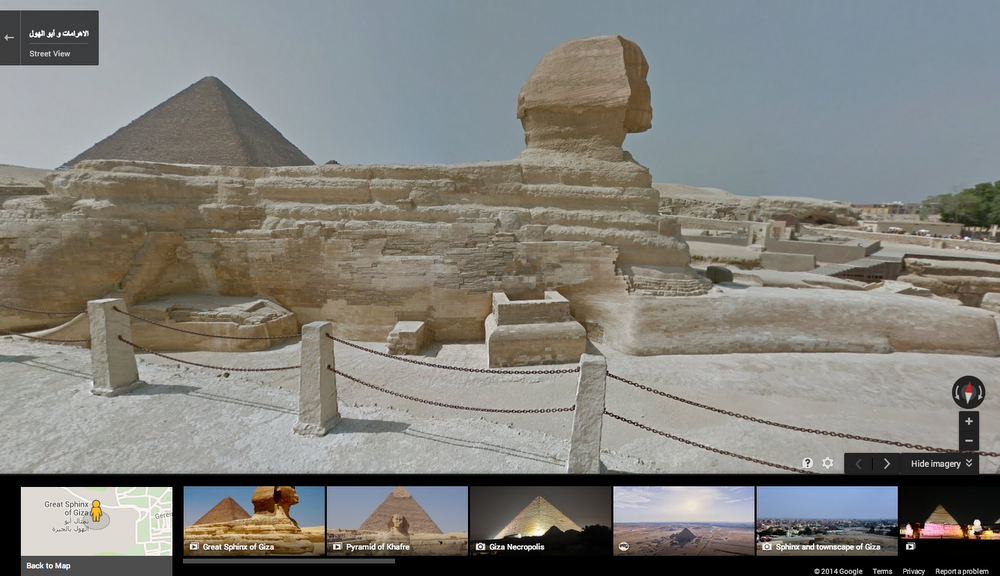 In addition to the Giza Necropolis, you can explore The Pyramid of Djoser, the ancient site of the world’s very first Pyramid designed by the great Egyptian Architect Imhotep in the ancient burial ground of Saqqara.

Other sites you can check out on your virtual tour include: Abu Mena, one of the oldest sites of Christianity in Egypt—the church, baptistry, basilicas and monasteries; the Hanging Church, one of the oldest Coptic Churches in the world; the Cairo Citadel, a medieval Islamic fortification and historic site; and the Citadel of Qaitbay, a 15th-century defensive fortress on the Mediterranean coast.

If wandering through the imagery of these historical sites has piqued your interest in Egyptology, head over to the Google Cultural Institute, where you can explore the treasures of ancient Egypt through a series of drawings, historic photographs and artifacts from the famed sites.

The Pyramids of Giza have survived nearly five millennia and are the planet’s oldest man-made wonder. Now their legacy—and the legacy of many other sites of ancient Egyptian culture—are preserved in a new way with panoramic and immersive Street View imagery. We hope you’ll take a moment to step back in time and explore what was once known as the Gift of the Nile.