A Year in Search: the moments that defined 2014

Every year, we reflect on the moments that made us laugh, smile from ear to ear, or stay gripped to our screens in our annual Year in Search. In 2014, we were struck by the death of a beloved comedian, and watched news unfold about a horrific plane crash and a terrifying disease. We were captivated by the beautiful game, and had fun with birds, a bucket of ice, and a frozen princess.

Watch our video to rediscover the events, people and topics that defined 2014:

“You're only given a little spark of madness. You mustn't lose it.” The passing of beloved comedian and actor Robin Williams shook the world, bringing many people online to search for more information and to remember—and putting Williams in the #1 spot on our global trends charts. There was even an uptick in searches related to depression tests and mental health in the days following his death. We revisited his iconic roles in movies like Aladdin and Dead Poets Society and found solace in gifs and memes that captured Williams’ spirit.

All the world’s a stage

Nothing brings people together like sports, and 2014 had one of the biggest athletic events in recent memory. The World Cup in Brazil had its fair share of unforgettable moments and had everyone glued to their TVs and mobile devices all summer. From Luis Suarez’s bite heard around the world, to Tim Howard's superman performance vs. Belgium, to Germany’s incredible run to their fourth title, the competition certainly lived up to its reputation and topped the charts.

While sports brought people together, so did a good cause. This year, awareness for Amyotrophic Lateral Sclerosis, better known as ALS or Lou Gehrig’s Disease, reached an all-time high around the world due to the viral ALS Ice Bucket Challenge. As celebrities and everyday people alike braved a bucket of ice cold water for a cause, donations to help find a cure for the illness hit almost $100 million. 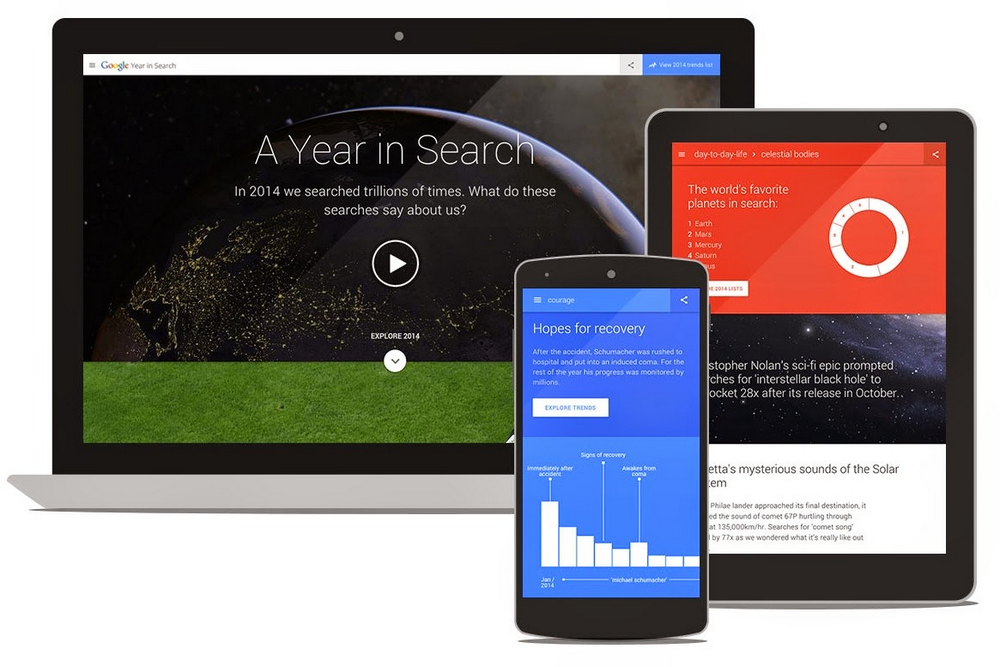 How could a plane just vanish into thin air? In the wake of the disappearance of Malaysia Airlines Flight 370, that question propelled the mystery to the global trends charts. As the investigation continued on the ground and online, people stayed hopeful for a happy ending despite the dim odds: searches for “mh370 found” outnumbered searches for “mh370 lost.”

Here’s the full list of our top 10 global trending searches: 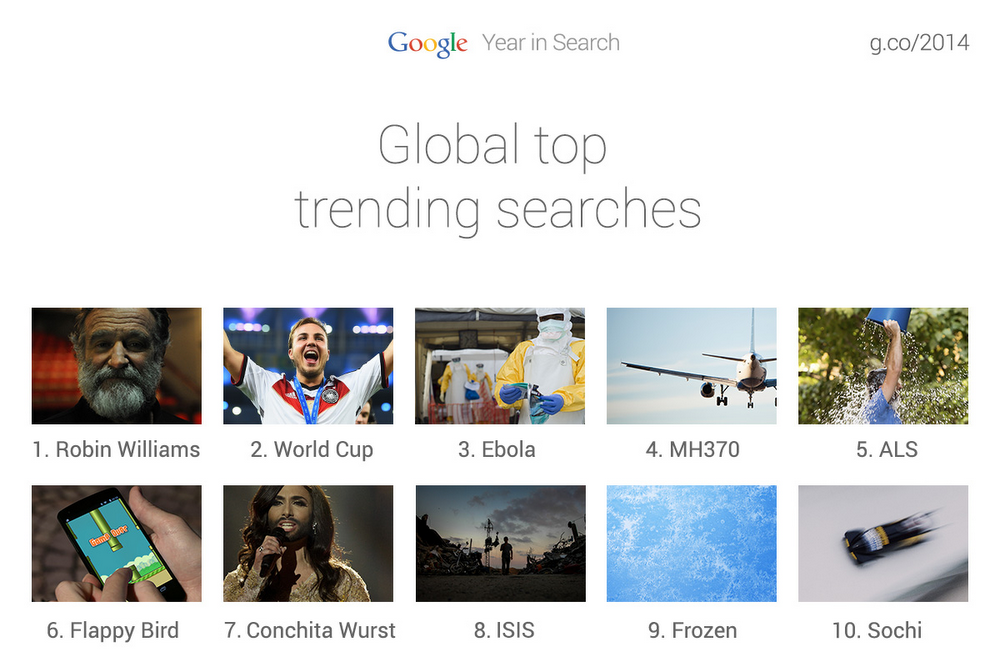 You can find more on these top searches and more at google.com/2014

Explore the stories from the year, one chapter at a time

On our Year in Search site, you can take an in-depth look at the stories that made 2014 unforgettable. From the rise of the selfie, to understanding if we search for “how” more than “why,” each chapter shares a glimpse into the people and events that drove this year forward.

We've also made it easier to find the trending topics of the year directly from Google Search. For the first time, a simple search for [google 2014] will give you a peek at what made the top trending lists from around the world. And you can follow more insights from the year with #YearInSearch. So take a moment to appreciate what this year had to offer. It’ll be 2015 before you know it.