Through the Google lens: search trends April 25-May 1

From matters of the heart to matters off the court, join us on a trip to a galaxy far, far away for our look back at this week's search trends.

It’s the end of George as we know him. Saturday, word got out that longtime bachelor George Clooney was engaged to his girlfriend, Amal Alamuddin. Alamuddin is a respected human rights lawyer in Britain, but she’s not—or wasn’t—a household name, and many people turned to search to learn more about the woman who captured Clooney’s heart. While they were at it, they looked for information on actress Talia Balsam, who was married to George in the early 90’s (for those of you paying attention, that’s pre-Doug Ross!). In other celebrity couple news, Prince Harry and Cressida Bonas have reportedly broken up. So, if you’re disappointed that George is off the market, there’s still hope for women around the world wishing to marry a royal.

A historic week for the NBA

The fetch is strong with this one 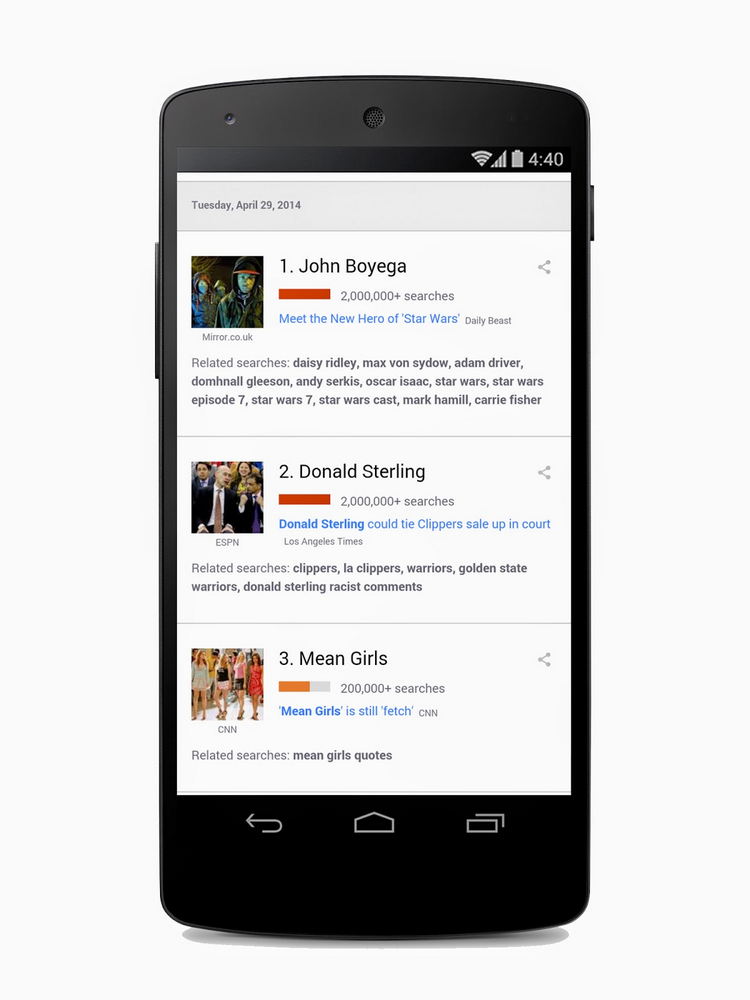 On Wednesday, we wore pink in celebration of the 10th anniversary of Tina Fey’s “Mean Girls.” The movie that gave us “fetch” was the subject of so many searches, quizzes (searches for [mean girls quiz] were up 350 percent) and retrospectives that even Cady Heron might have trouble adding them up. And though rumors of a [mean girls reunion] (up 850 percent) are apparently false, that can’t exactly be said of another movie on searchers’ minds this week: “Star Wars.” A photo revealing the cast of J.J. Abrams’ “Episode VII” showed original stars Harrison Ford, Carrie Fisher, Mark Hamill and more seated alongside new faces like John Boyega, Daisy Ridley and Adam Driver. The new cast members were on the top of the search charts quicker than the Millennium Falcon could make the Kessel Run. (Fun fact: searches for [bill weasley] were also on the rise; “Episode VII”’s Domhnall Gleeson played him in the “Harry Potter” movies.).

Actress Emma Stone made headlines this week when she faced off against Late Night’s Jimmy Fallon in an epic lip syncing battle; searches for [emma stone fallon] climbed 2,200 percent. But while we can’t deny Emma’s spoken-word skills, we’ve got a soft spot for two other playful phrases that made the zeitgeist this week. On Saturday, searchers learned that [zonkey] was not an adjective for how you feel after a red-eye, but actually a rare zebra/donkey cross born last week in Mexico. And [it’s gonna be May] was trending Wednesday after Organizing for Action’s Barack Obama Facebook page used the meme-y caption on a photo showing POTUS with Justin Timberlake. Just to bring this week full circle, the Know Your Meme entry on “It’s gonna be May” includes a reference to… “Mean Girls.”

Happy Friday, and we’ll see you next week.