Anyone up for a look back at the last week on Google Search? We are! Read on to find out what the world was looking for this week.

Phew, where to start with this one. Taylor Swift and Nicki Minaj had a spat over VMA nominations (Taylor was nominated for Video of the Year; Nicki was not), worked through it and made up -- all on Twitter. It was a good lesson in the art of the subtweet, as well as the “sincere apology after responding to a subtweet that wasn’t directly about you” tweet. Searches about the incident topped 500,000.

But Minaj v. Swift wasn’t the only music-related drama to make the list of Trending Searches. Meek Mill, hip hop artist and Nicki Minaj’s significant other, started a Twitter rant of his own, alleging that rapper Drake doesn’t write his own material and inspiring more than a million searches. The two artists haven’t settled up yet, so stay tuned for more on that front.

Last but not least, country stars Blake Shelton and Miranda Lambert are calling it quits after four years of marriage and guess what — they both had stuff to say about it on Twitter. More than 1 million searchers took to Google to find out more. 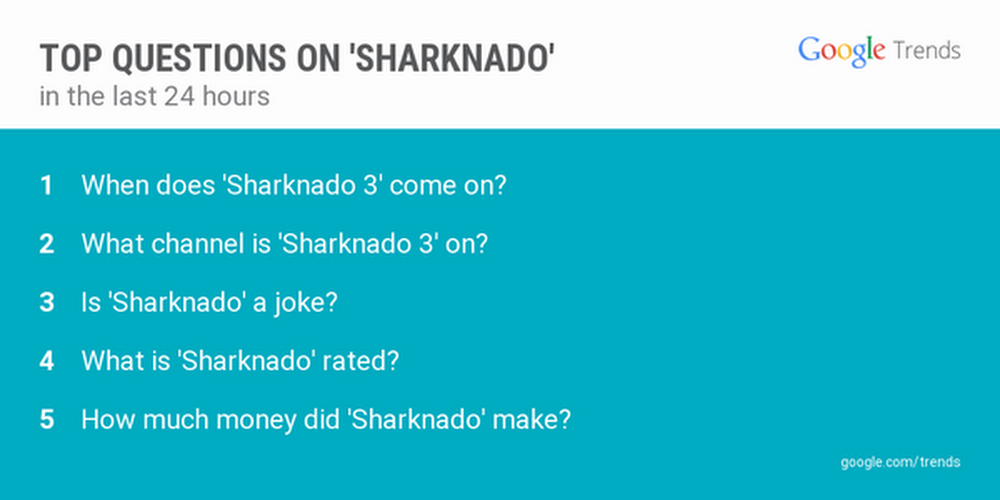 It was the week of the sequel. (The weequel?) James Bond is back -- the trailer for the upcoming “Spectre” was released this week, which got more than 100,000 people searching for the movie. And nearly as surprising as the idea of a shark-filled tornado itself, the Sharknado is back. “Sharknado 3” -- featuring 90s all-stars Tara Reid and Ian Ziering -- aired on Wednesday night and pulled in a cool 500,000 searches.

Speaking of all-stars (and also of the 90s) remember the days when an NBA superstar could star in a wide-release film with his Looney Tunes pals? Well, it’s happening again. This time, it’s not Michael Jordan, but Lebron James who inked a deal with Warner Bros. The company announced the partnership on Wednesday, leading to 200,000 searches. Reports suggest that while Michael Jordan will be replaced, Bugs Bunny will play himself, though there has been speculation about a case of cartoon patellar tendonitis he’s been coping with quietly for years.