Inspirational women. A surreal theme park. And a third-party candidate we can all get behind. This week had a little of everything—read on for a look at the top topics on Google Search.

Lieutenant Shaye Haver and Lieutenant Kristen Griest are the first women to break a major gender barrier and graduate from the rigorous Army Ranger School this week. The course is known for its tough physical challenges and a high dropout rate, and this was the first year women were admitted. Search interest in Haver and Griest has spiked more than 150X since Tuesday; at today’s graduation, they earned their tabs—and a place in history.

This Presidential campaign is Nuts

The Republican Presidential candidates continue to draw headlines in the long lead-up to the 2016 election. One of the top topics this week? Immigration, after Donald Trump said in an interview that he would overturn the law that grants citizenship to people born in the U.S.—a law better known as the 14th Amendment to the U.S. Constitution. It didn’t take long for the other candidates to take a stand one way or the other on the “birthright citizenship” issue, while searchers turned to the web to learn more about the Amendment and the ongoing debate. In less political political news, Trump also drew ire this week when he said that supermodel Heidi Klum—a knockout at 42—was “no longer a 10.” More than 200,000 searches—and a smart comeback from Heidi—weren’t far behind.

Meanwhile, there’s a new presidential candidate on the scene in Iowa. A 15-year-old high school sophomore named Brady Olson made quite the splash after he submitted his candidacy with the Federal Election Commission as “Deez Nuts.” Not only is he polling at a not-too-shabby 9 percent against Hillary Clinton and Donald Trump in North Carolina—Nuts was a trending topic on Twitter and he’s surpassed Clinton in search interest, too. 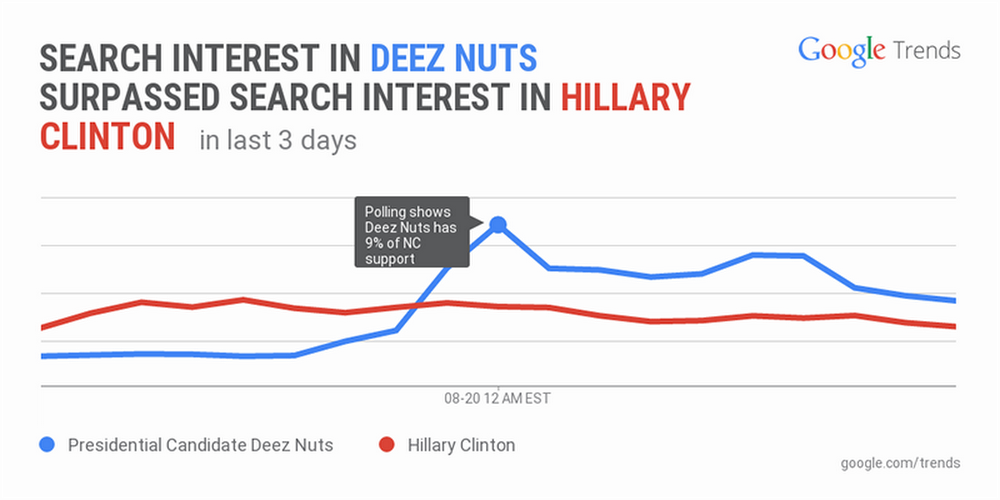 The cheating site Ashley Madison was a top trending term this week, after hackers stole user account and payment information and posted the data online. There were more than 1 million searches for [Ashley Madison] on Tuesday, with more than half a million for [Ashley Madison List] as people tried to find out whether someone they knew had a profile. But questions about the hacking were myriad, and sometimes innocent. Many wanted to know “who is Ashley Madison?” (spoiler: not a real person) while others asked “What is the dark web?” in an effort to find out more about the anonymous and hidden network where the data was released. 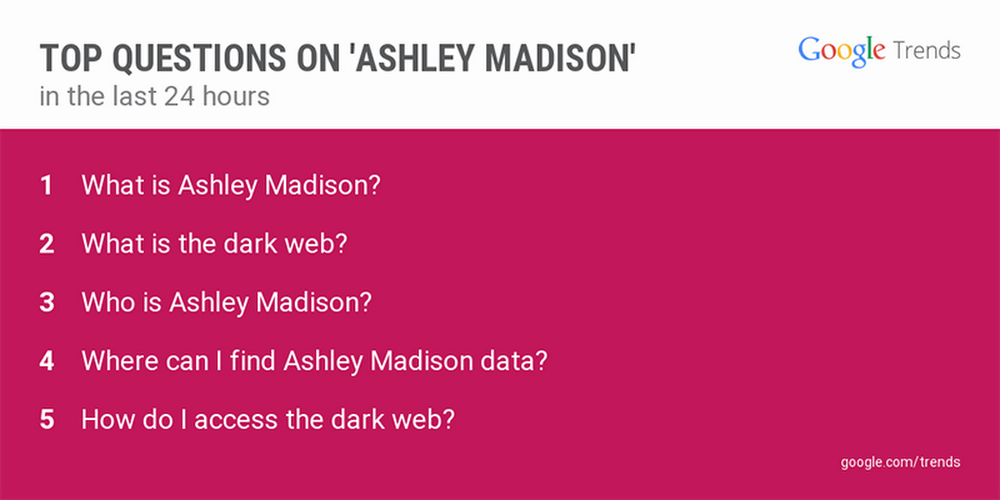 Be careful what you wish for

A new tourist attraction in the U.K. is already living up to its name. “Dismaland,” an art exhibit by the elusive Banksy, and "the U.K.'s most disappointing new visitor attraction,” features a derelict castle with a dirty moat, gloomy park attendants, and bizarre works by 50+ artists. After being shrouded in secrecy, the “bemusement park” debuted this week to the tune of 200,000+ searches, and today search interest in Dismaland surpassed that of Disneyland’s. (One of searchers’ top questions: “What does Disney say about Dismaland?”) Unfortunately (or, appropriately, depending on your viewpoint), the park has also had its fair share of troubles already. As its website crashed under the weight of 6 million hits, and hundreds of people lined up outside the resort, many are wondering whether they’re on their way to see a conceptual art work, or already a part of one.