It must be nice to have Hamilton on your phone

HAMILTON fans got a treat last Friday when the team behind the broadway hit released … Wait for It … an app! Available on Android and iOS, the app lets you enter the #Ham4Ham lottery more easily and has fun features for the biggest HAMILTON fans out there. It was also one of the first apps to be built with Firebase, Google’s mobile development platform to handle the backend and infrastructure, as well as Flutter, a new UI toolkit to make it easy and fast to build high-performance, modern, beautiful apps for iOS and Android.

To learn more about how the app was built, and why the HAMILTON team chose to use Flutter and Firebase, we sat down fan to fan with Mike Karns, HAMILTON’s director of social media, and David DeRemer from POSSE, who helped build the HAMILTON app.

Seth: What made you decide to build and launch a mobile app?

Mike: We’re always looking for opportunities to create a unique experience for the HAMILTON community, whether or not they’re able to be in the theatre each night. This app expands our presence in digital space and brings fans closer to HAMILTON.

How did you decide which features to include?

Mike: It started as a way for people to enter the HAMILTON lottery, and we brainstormed more ideas from there. Because HAMILTON has broken the confines of normal Broadway scope and audience, we’ve been able to build a really diverse fanbase in terms of age, location, etc. So all of our ideas served the purpose of giving those fans ways to connect with HAMILTON in more real ways.

David: It was all about providing access. HAMILTON is in such high demand, yet so many people love it and it’s so important from a historical and artistic perspective. How do make sure the HAMILTON community doesn’t feel like an exclusive club that requires thousands of dollars to be in? That’s ultimately what the lottery is for, and we’re improving the experience. Before you had to go the website every day and re-enter your info—now you can get a reminder and then enter in one tap.

Then there are the other features like shareable stickers with lyrics and HAMILTON emojis, #HamCams (HAMILTON-themed photo filters), a merch store, and exclusive content from cast members that make it even more fun. We wanted to go beyond the lottery and keep things interesting for someone who might have tickets to see the show a year from now. And we’ve got a lot of ideas for more features to make sure it’s still compelling even in five or seven years. 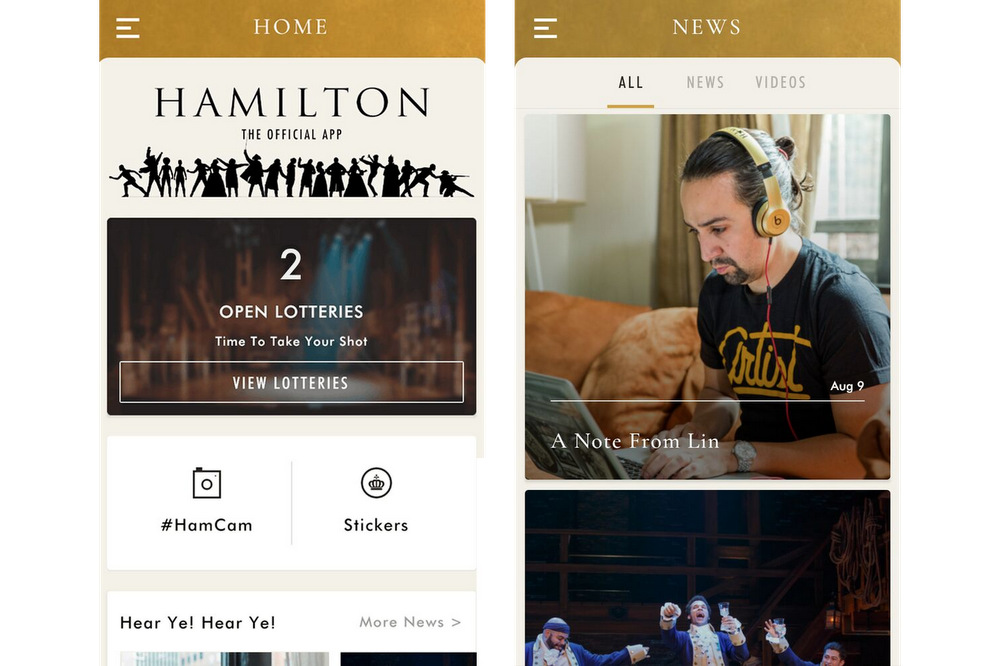 How did you decide to use Flutter to build and manage your app?

Mike: We knew we’d have to build this app quickly, while also making sure that HAMILTON was accessible to everyone. To democratize the brand, there was never any question that we’d have to build an app that was available on both Android and iOS.

David: That’s why we decided to use Flutter, a new modern, reactive UI toolkit that is portable across iOS and Android. Flutter allows us to have a less complicated codebase, which means we can be more efficient and keep parity between platforms.

Because Flutter is new, this was also a unique opportunity to collaborate with Google to improve the Flutter SDK. We provided a lot of feedback and bug reports throughout the development process! The result is something really unique—I don't think there are many other apps that use this technology yet. And not too many companies would have had the willingness to work with us and take a risk like that. It really ties into the HAMILTON idea of not throwing away your shot! By the way, developers can even find some HAMILTON easter eggs in the Flutter documentation.

And what about Firebase?

David: Firebase was also a critical component building a great app for our fans. With Firebase, we didn’t have to worry about setting up and maintaining servers. Instead, we were able to spend more time designing beautiful UIs and testing new interactions. In addition, a key feature of the app is the ticket lottery, which offers fans a chance to get tickets to the constantly sold-out HAMILTON show. We used Cloud Functions for Firebase to help coordinate the lottery workflow between the mobile app, custom business logic, and partner services.

David: The lottery is the number one feature, so if the lottery works better, that will be a success. Success is also determined by the percentage of people have an issue and how many bugs are there, and if it scales. And I just hope that it helps fans connect to HAMILTON.

Mike: Lin-Manuel Miranda frequently says to his fans, "Here, I made this for you...". We’ll feel that we've accomplished our goal when fans everywhere are using this app to share their passion for the show in a different ways.

Finally, we couldn’t let you go without asking. What is your favorite HAMILTON character, song or quote?

David: One of my favorite characters is the King of England, he he cracks me up. I know it’s a weird choice, but the way they portray him is incredibly clever and funny. His “awesome, wow” line is my favorite.

Mike: Aaron Burr's line "I am inimitable, I am an original," most exemplifies the work my team and I try to do every day with HAMILTON. Our challenge is to create content and products that live up to the level of what Lin has created.