How this Googler celebrates Native American Heritage Month all year

When I was growing up, my Misho (my grandfather) was the chief of our tribe (Prairie Band Potawatomi) and would often tell my brother and me stories and tales sacred to our Indigenous history. When I was in second grade, I asked my Misho to come into my class to tell his stories for show and tell. I was immensely proud of him, and grateful for the opportunity to share my culture with my classmates. But after he left, my classmates started calling me names like “Pocahontas,” and war-whooping at me on the playground. After that, I didn’t mention my tribe or Native affiliation to classmates or colleagues again until I was in my 20s. 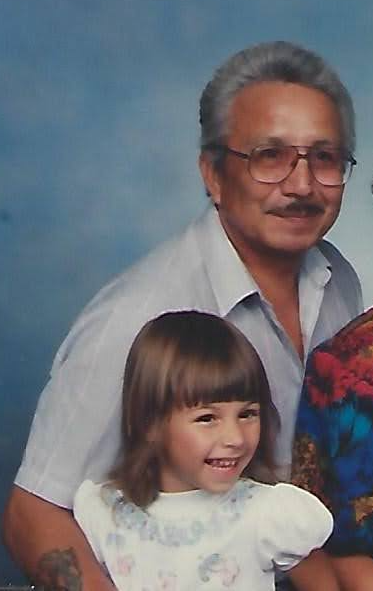 Cheryl and her Misho

When I got pregnant, I realized I wanted to reconnect with my culture. I wanted my son to know about the powerful, strong history of the Prairie Band Potawatomi, and about his family and my Misho. I threw myself into trying to learn the language, the history and our stories again. I bought my son children’s books written by Indigenous authors, and watched every film and movie I could about Indigenous culture — even if it wasn’t about the Potawatomi.

As part of reconnecting with my heritage, I also joined Google’s Aboriginal and Indigenous Network (GAIN) to stay up to date on any native-focused events at work. I’d been a member of other employee resource groups at Google before, like Women@ and Pride@, but I wanted to find a group of other Native and Indigenous people. I was thrilled to discover GAIN and see that there were not only other Indigenous Googlers like me, but that there were enough of them to organize their own group.

During this time reconnecting to my heritage, I watched a film about the Murdered and Missing Indigenous Women (MMIW) movement. According to the United States Department of Justice’s Missing and Murdered Indigenous Persons (MMIP) Initiative, “American Indian and Alaska Native people suffer from unacceptable and disproportionately high levels of violence, which can have lasting impacts on families and communities.” In Australia and Canada, Aboriginal and First National Australian women are six times more likely to be victims of homicide than non-Native women. In the U.S., a Task Force was recently created with the purpose of working with tribal governments and developing protocols for the cases of missing and murdered Indigenous peoples, among other things. I remember feeling completely gutted after listening to the stories of Indigenous women disappearing from their Indian reservation, never to be seen again. This is particularly traumatic for many Indigenous tribes as funeral drum and burial ceremonies are critical for the spirit to move on to the afterlife, and for those of us behind to mourn.

After seeing that film, I reached out to GAIN leadership and asked what we could do to raise awareness for MMIW. The next thing I knew, we had a working group of more than a dozen people raising awareness and resources for MMIW organizations. We’ve even held 10 events with Googlers, including panels with Black and Indigenous women to discuss the intersectionality of murdered and missing women of color, began a podcast listening group, held a 5K run and hosted other fundraising and awareness events. This experience has made me feel more connected to my tribe and my culture. It’s empowered me to share more of my whole self at work — I’ve introduced colleagues to my language, for instance, and I’ve felt like I have a space to identify as Native American. I’m proud to be a member of GAIN, and appreciate how much they help to raise awareness not only about Indigenous culture but also MMIW.

There is a saying in the Indigenous community about MMIW: “When an Indigenous woman goes missing, she goes missing twice — first her body vanishes and then her story.” With help from Googlers and GAIN, and through the work of MMIW organizations and their volunteers, I hope these Indigenous women, girls and two-spirit peoples do not go missing forever. You don’t have to be a Googler to take part: You can educate yourself about MMIW, look into policies meant to address this issue, or find ways to support organizations that advocate for MMIW. These missing people are not just faces on missing posters. They’re family — and we are all connected.