Throwing it back: Google leaders share their first summer jobs

As the old saying goes, “get a summer job and you’ll stick with it forever.” Just kidding, no one says that. If they did, many of Google’s leaders—who earned their first paychecks serving burgers, planting trees and hawking hair accessories—would be doing something pretty different right now.

If you looked at the resumes of the people leading teams, initiatives and products at Google today, you'd see a wide range of first jobs that, in many cases, taught lessons that still ring true. So as people around the country are wrapping up their seasonal gigs, we asked a few Google leaders about the summer jobs they once had.

Let’s get some fresh air first. Never ones to spend their summers behind a desk, these Googlers got their hard-earned paychecks in the great outdoors. Up in Canada, Partnerships President Don Harrison fought his way through mosquitoes, ticks and bears to plant trees. Further south in Michigan, there were fewer ticks but more kids at Diversity VP Danielle Brown’s lifeguarding gig. And Communications VP Corey DuBrowa clocked 18-hour days on a farm in Oregon, where the wheat and grass seed wasn’t going to harvest itself—no, that was Corey’s job. 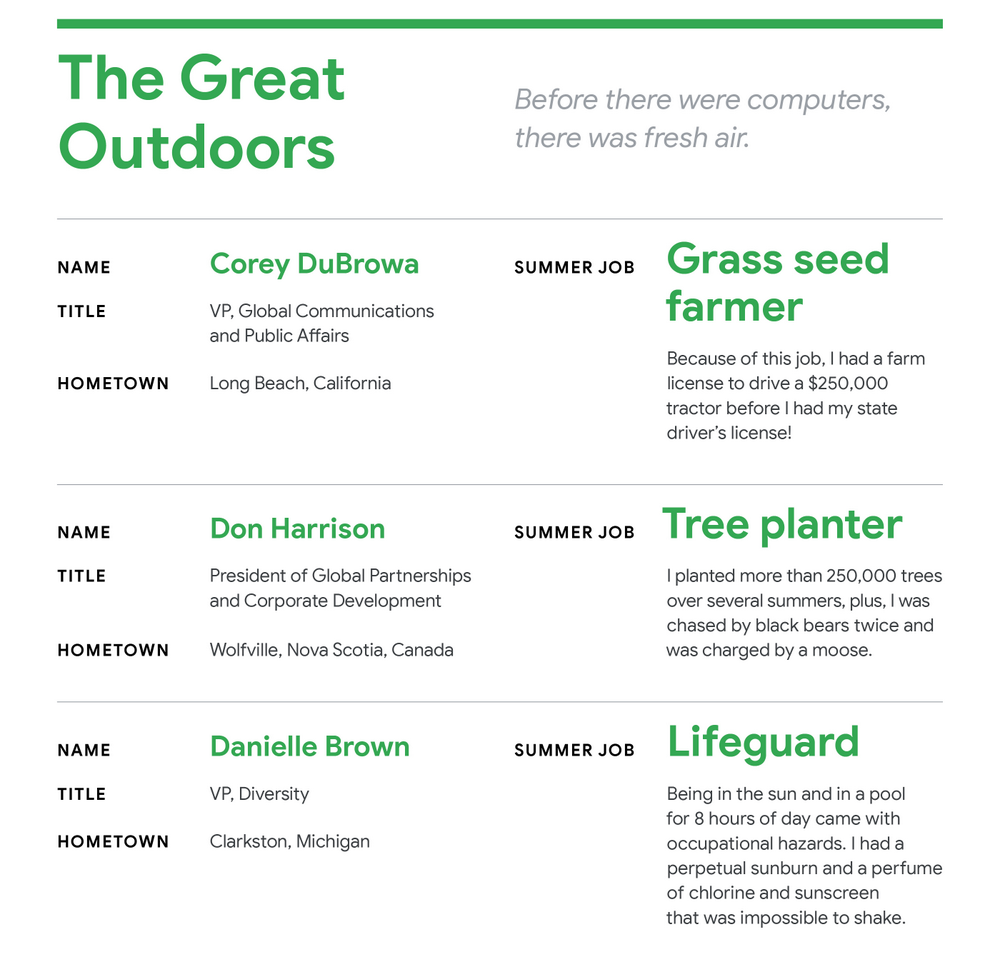 Long before Google.org or GOOG, Google.org President Jacquelline Fuller and VP of Investor Relations Ellen West each donned a “polyester rust uniform” and set up shop at the drive-thru under the iconic double arches. For the rest of these Googlers, a summer job meant getting your hands soapy, taking food orders, and getting a crash course in mixology. 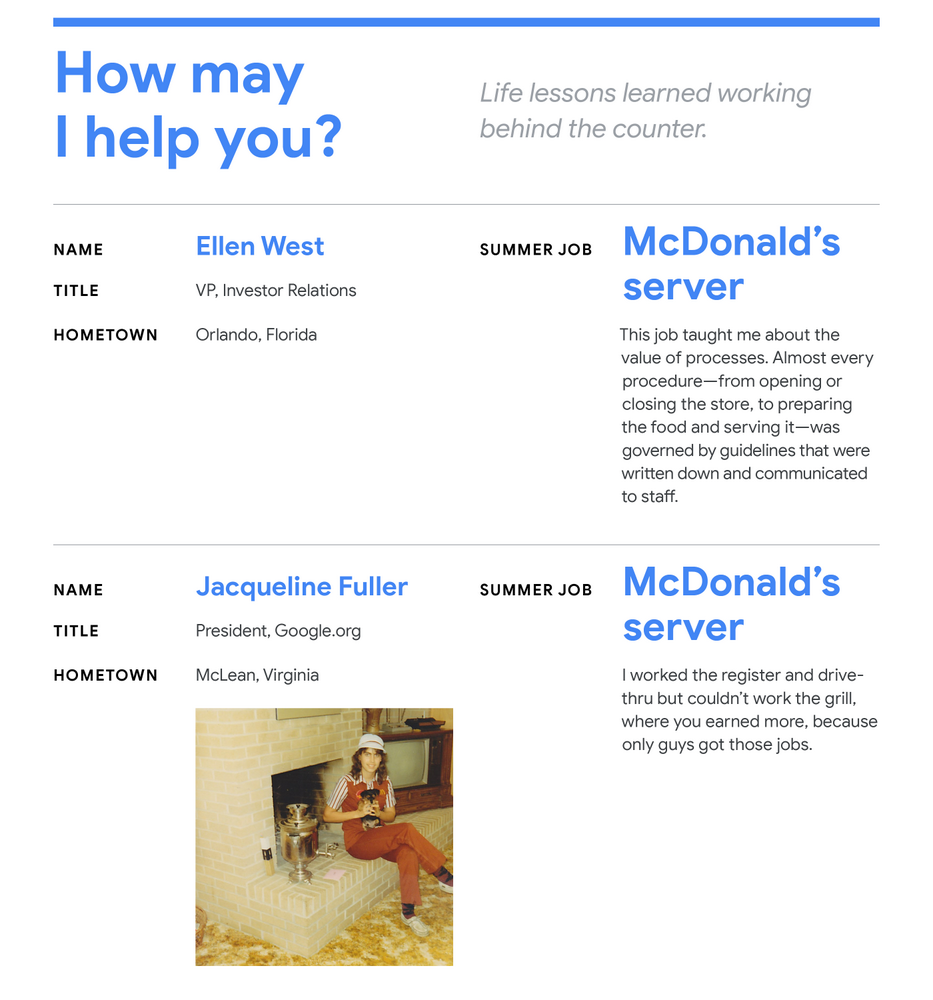 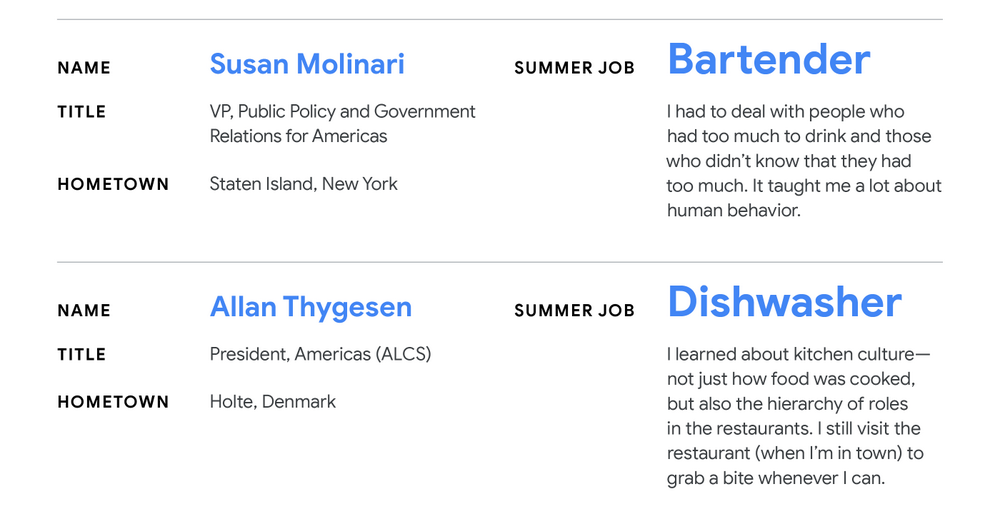 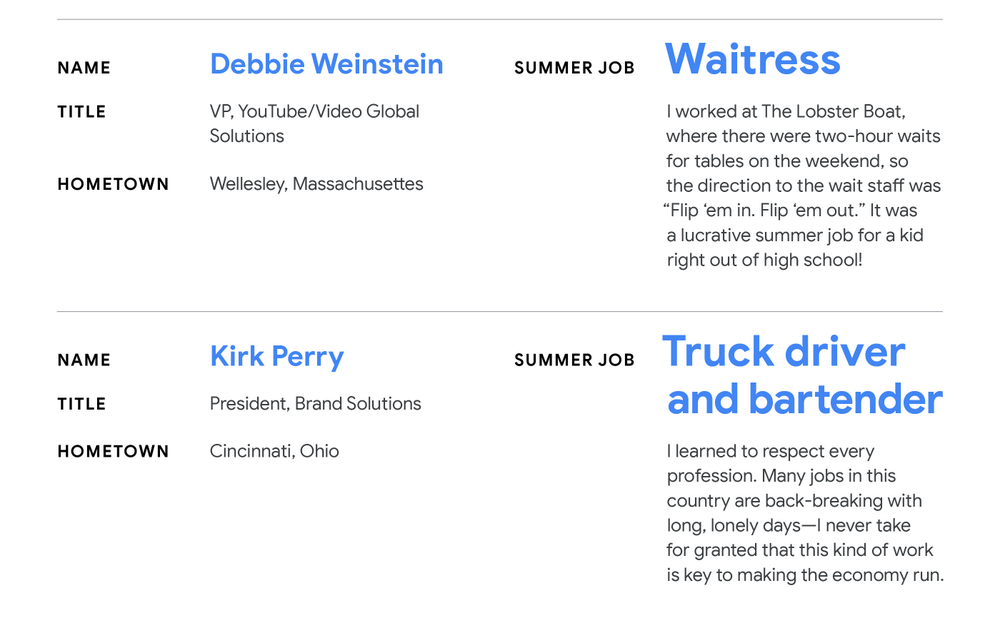 Whether selling sleeping bags, fruity drinks or hair accessories, these Googlers started out as young entrepreneurs. Eventually, Kent Walker traded in sleeping bags for legal documents. Ben Gomes left the Rasna stand to take an internship where he used neural nets to predict KFC chicken demand (before becoming one of Google’s first employees). And long after her scrunchie empire, Ana Corrales ended up in hardware, putting Google’s products in the hands of our customers. 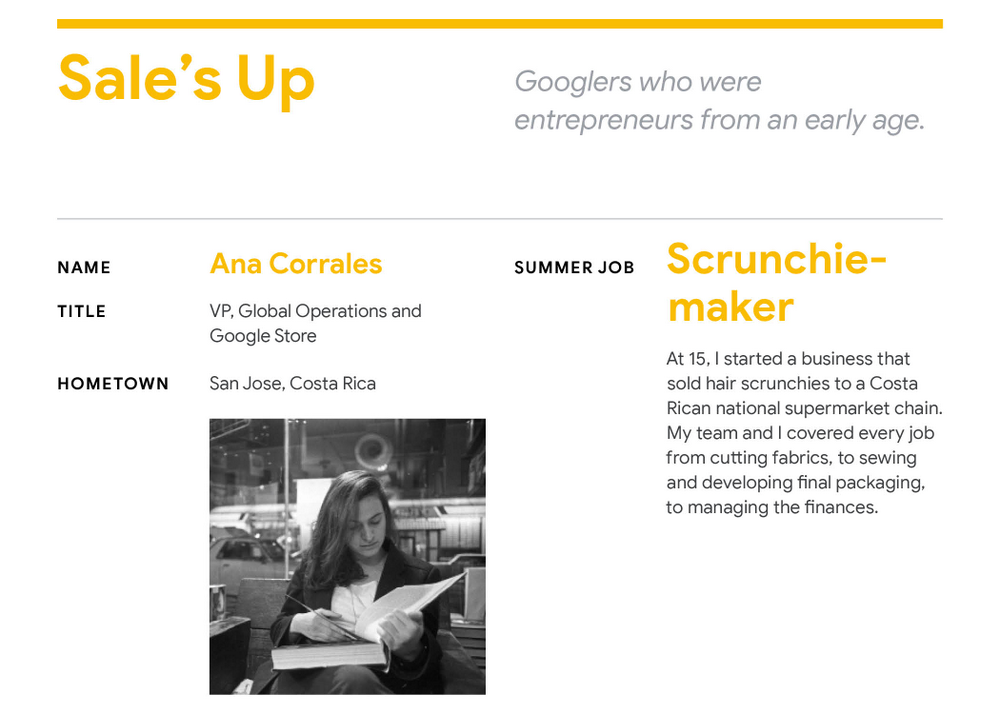 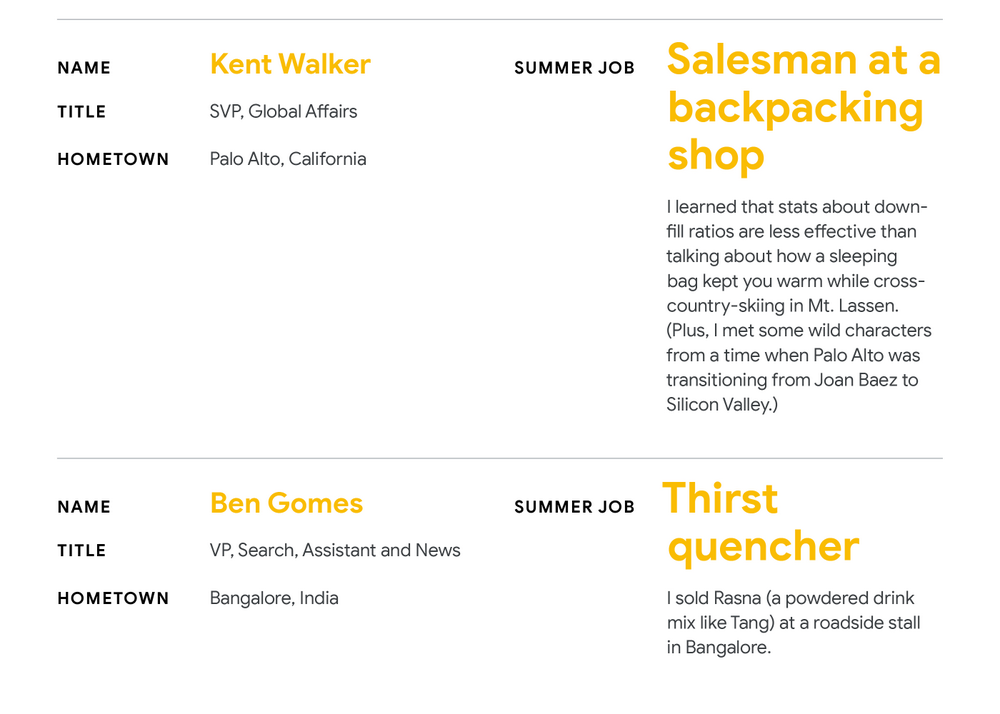 Jeff Dean’s first-ever paying job struck a chord with wedding guests, while Vint Cerf’s interest in automatic coffee makers wasn’t as strong as the java they provided—after that summer, he intensified his studies in math and science. Though these gigs weren’t forever, these Googlers still learned a thing or two. 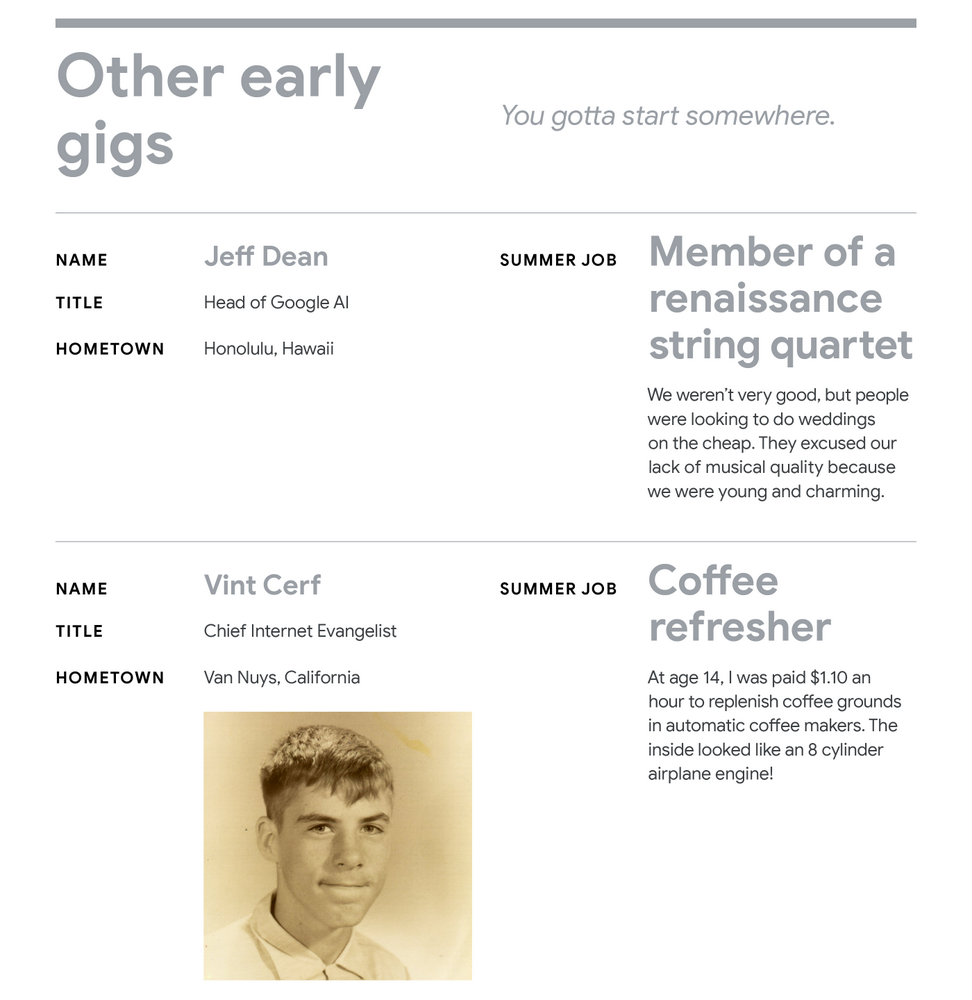 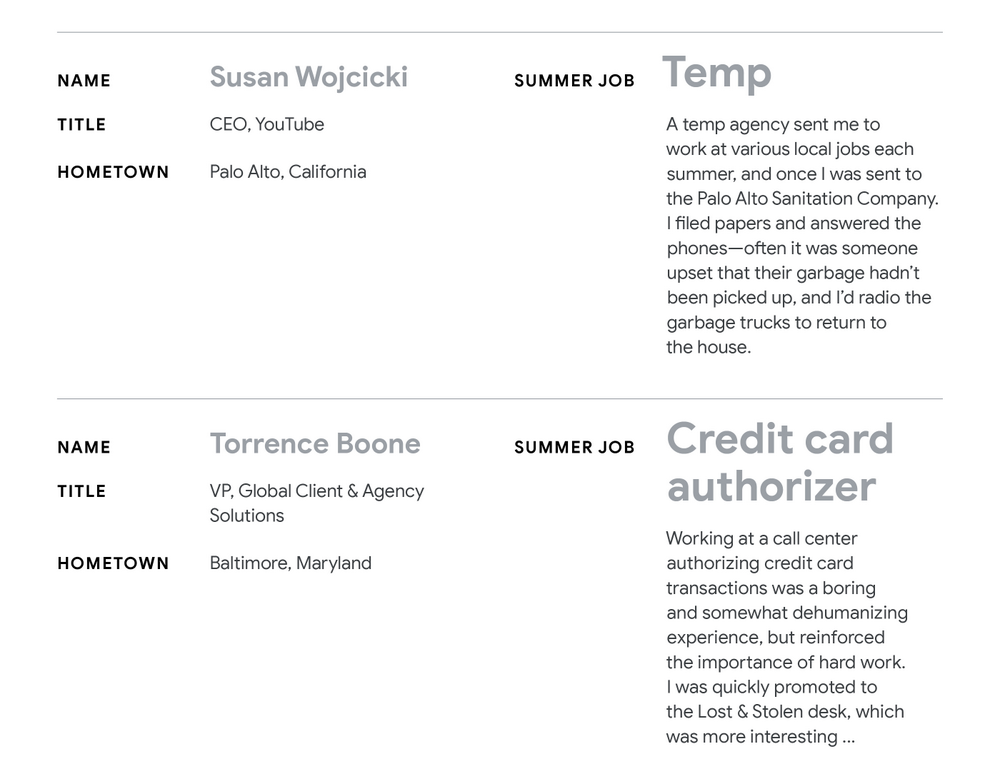 Early on, these people showed a knack for the careers they’d eventually find at Google. Beyond her duties fetching coffee and handing out mail, Stacy Sullivan's summer job taught her about company structure and how leaders treat employees, setting her up to become Google’s Chief Culture Officer. For Richard Gingras, VP of News Products, the headline was written long ago: He spent a summer stacking and collating newspapers for The Providence Journal. 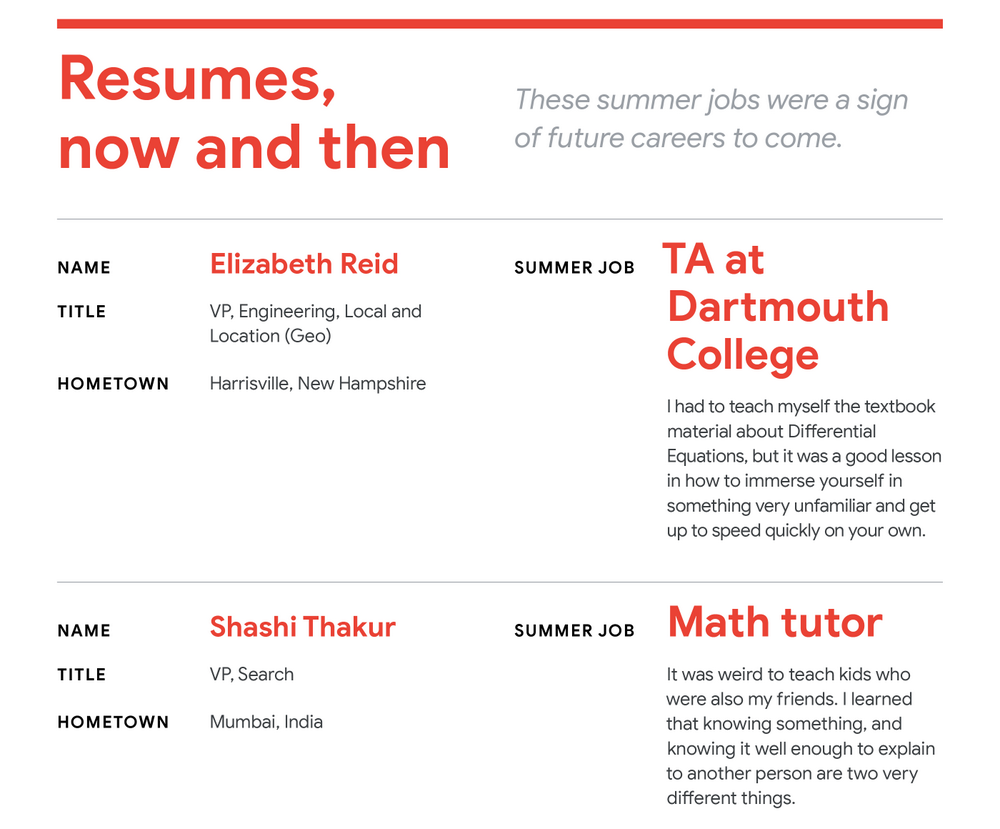 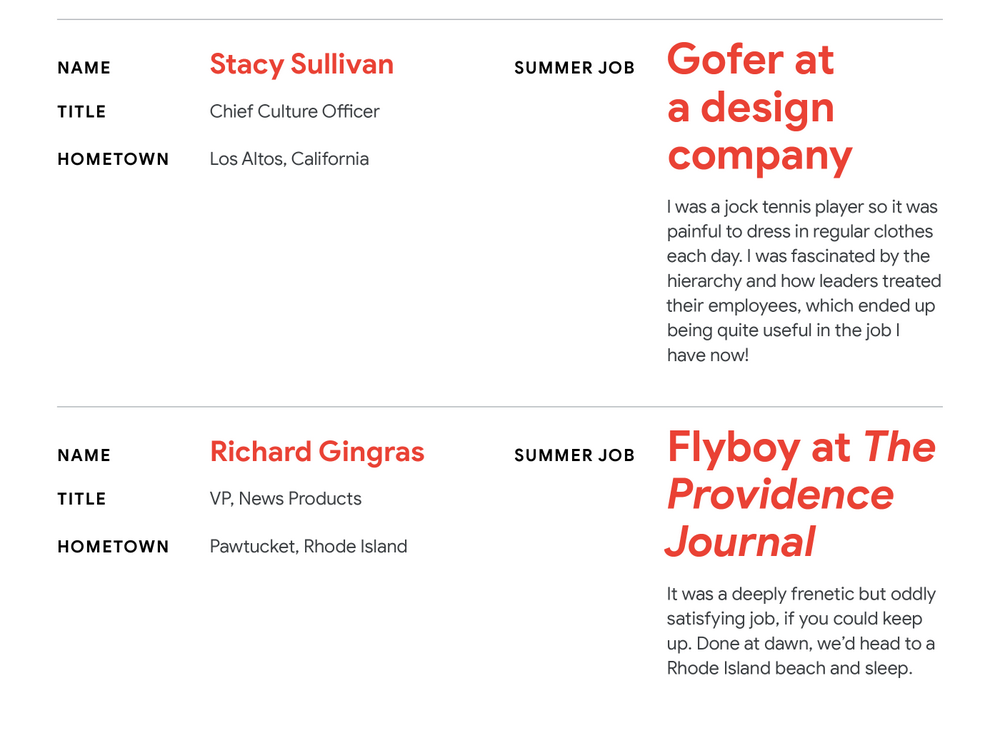 See you next summer!