A look at how news publishers make money with Ad Manager

Editor's note: This blog was initially posted on the Keyword.

In this post, we analyze how top news publishers monetize their content using Google Ad Manager, and how much revenue they retain. In a separate article, we explain how Google’s display advertising business works when advertisers and publishers choose to use our buy-side and sell-side services.

Thousands of news publishers around the world use Google Ad Manager to run digital advertising on their websites and apps. News companies tell us they choose our ad management platform for its performance, controls and ability to integrate with hundreds of third party advertising technologies to help them earn the most revenue for the ad space they sell.

We work hard to ensure our platform helps publishers succeed, so people around the world have access to high-quality news and information online. To illustrate how news publishers use our platform to monetize, we recently looked at the 100 news publishers globally with the highest programmatic revenue generated in Ad Manager. We then ran an analysis focused on the average fees retained by Ad Manager across those publishers’ digital advertising businesses.

While the business model of each news organization is unique, this data provides clarity into the different ways major news publishers monetize their content when they use Ad Manager, and how much Google retains from the services we provide. A large portion of the revenue we keep funds the costs of running this business. Our ongoing investments in this space include development and maintenance of data centers around the world as well as advancements in machine learning and product innovations that increase publisher revenue and contribute to the open and free internet.

In analyzing the revenue data of those top 100 news organizations, we found that on average, news publishers keep over 95 percent of the digital advertising revenue they generate when they use Ad Manager to show ads on their websites. This analysis reflects the average fees retained by Ad Manager, and does not include fees that may be paid to other platforms and services.

Click on the image below to view the full size graphic. 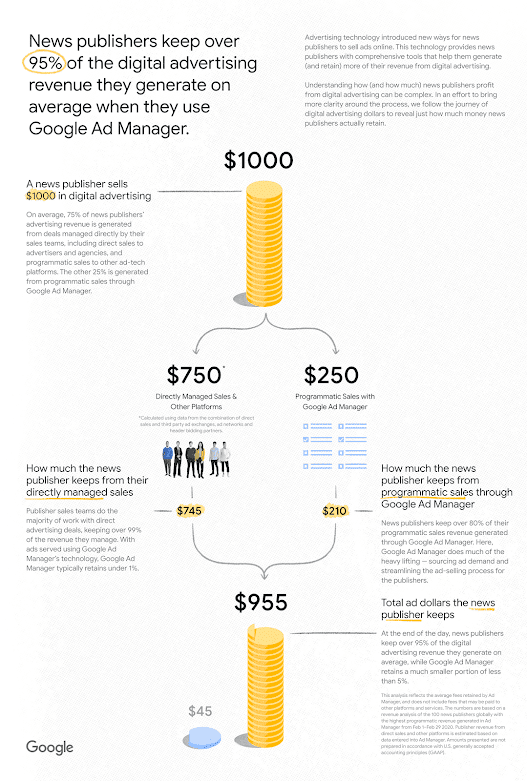 The majority of news publishers’ digital advertising revenue comes from ad sales managed by their own teams. This includes publishers’ direct sales to advertisers and agencies. For example, news publishers sell ad space directly to advertisers, who want specific placements on their sites, like the top of the homepage. Publisher sales teams also negotiate deals with other ad tech platforms like ad exchanges, ad networks and header bidding providers.

When news publishers sell inventory via direct sales or other ad tech platforms, they can use our ad serving technology in Ad Manager to deliver the ad on their website. As the publisher does the majority of the work when an ad is shown from one of these sources, we charge a minimal ad serving fee for the service we provide. When ads are sold this way, news publishers keep over 99 percent of the revenue.

When news publishers sell ad space programmatically with Ad Manager, they have access to robust tools that allow them to manage the ads that appear on their site. For example, publishers can input the minimum price of their ad space, control the brands that can advertise, and indicate the types of ads they want to show, among other preferences. Ad Manager then finds the highest paying advertiser that meets the publisher’s requirements. When an ad is shown programmatically through Ad Manager, news publishers keep over 80 percent of the revenue.

We invest in Ad Manager to support our news partners
We built Google Ad Manager to help publishers monetize their content and grow revenue. Over the years, we’ve continued to invest in innovations that improve our technology, so news companies can earn more from digital advertising and create sustainable businesses. Alongside our product enhancements, our dedicated news team partners with publishers of all sizes to uncover new ways to adapt and grow their business with advertising. This helps keep the best of the internet open and free for all of us.

*The analysis in this post reflects the average fees retained by Ad Manager, and does not include fees that may be paid to other platforms and services. Amounts presented are not prepared in accordance with U.S. generally accepted accounting principles (GAAP).