Powering the digital economy; building a helpful Google for everyone in India 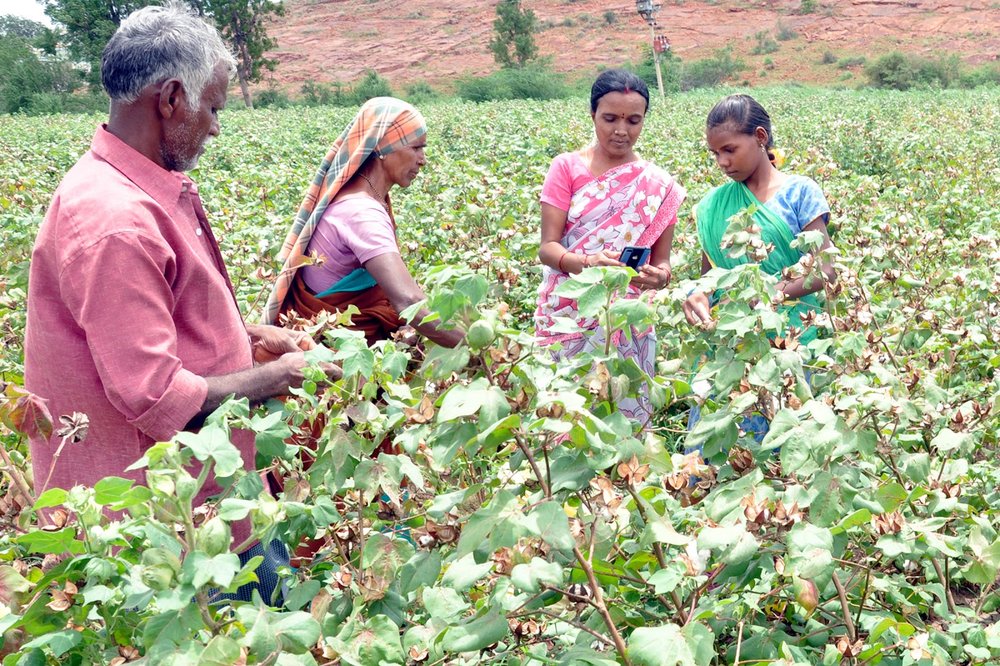 Rama Devi has taught more than a thousand women how to use the internet in her role as a Saathi—now she’s helping farmers become more productive. Amita Raghu has used digital tools to grow Krishne Tassels, her traditional saree tassel business, and trained 700 women in the art of tassel-making. Rajesh Jain, winner of Google’s AI Impact Challenge, has created an app that helps cotton farmers identify pests just by snapping a photo.

They are among the 460 million Indians who are using the internet to search, create, solve problems, build businesses—and help others. They show how technology isn’t just driving economic growth in India, but creating a ripple effect of opportunity across communities.

Continuing that momentum was the focus of this year’s Google for India event, where we shared announcements aimed at making the internet more accessible, inclusive and empowering for Indians.

Four years ago, we launched Google Station: a partnership with Railtel and Indian Railways to bring fast, reliable and secure WiFi to 400 train stations. We hit that milestone last May, and we’ve also expanded the program beyond train stations to include thousands of public buildings and spaces around the country.  And today we’re announcing the next step: a partnership with BSNL to bring high-speed public WiFi to villages in Gujarat, Bihar and Maharashtra —places that haven’t had a WiFi connection before.

We’re also launching an initiative to help the hundreds of millions of Indians who use 2G phones get the information they need, without requiring data or an internet connection. The Vodafone-Idea Phone Line—supported by the Google Assistant—enables Vodafone-Idea users to call a single number free of charge (000 800 9191000), at any time, and ask for everything -- from sports scores, traffic conditions and weather forecasts or get help with homework.   Starting today, we’re delighted to be expanding the service to all English- and Hindi-speaking Vodafone-Idea customers across India.

As we improve access to the internet, we also need to make it relevant and helpful, with information Indians need in the languages they speak.

For many Indians, voice is increasingly becoming their preferred way to search. Two years ago we introduced the Google Assistant, and have since expanded it to nine Indian languages. Hindi is now the second-most used Assistant language globally (after English). And :

Last year we launched Bolo, a speech-based app that helps children learn how to read -- today we’re adding Bangla, Marathi, Tamil, Telugu and Urdu to it, and expanding our content pool by partnering with publishers like Chotta Bheem and Katha Kids.  Bolo has already helped 800,000 young Indians read stories more than three million times and speak half a billion words. We are working with partners like Saajha, the Kaivalya Education Foundation, Pratham Education Foundation and Room to Read-- and looking forward to making it available to even more Indian families.

Together with the introduction of interpreter mode in the Assistant on Android and Android Go phones in the coming months, which will help translate from one language to another, we’re confident that these initiatives will help unlock more relevant information and content for even more users across India.

The biggest story in India’s booming internet economy has been the rise of digital payments.  BHIM UPI has transformed how India makes payments. From 17 million payments in August 2017, to crossing 900 million payments last month, India is setting the global standard on how to digitise payments.

We launched Google Pay to support this growth, giving Indians a simple, safe and reliable way of making and receiving payments. In the last 12 months alone, we’ve grown more than three times to 67 million monthly active users, driving transactions worth over $110Bn on an annualized basis, with hundreds of thousands of offline and online merchants. But we think there’s an even bigger role for Google Pay to support businesses.

Starting  today, we’re introducing the Spot Platform which enables merchants to create branded commercial experiences that bridge the offline and online worlds.  Popular services like UrbanClap, Goibibo, MakeMyTrip, RedBus, Eat.Fit and Oven Story are already on board through our early access program. 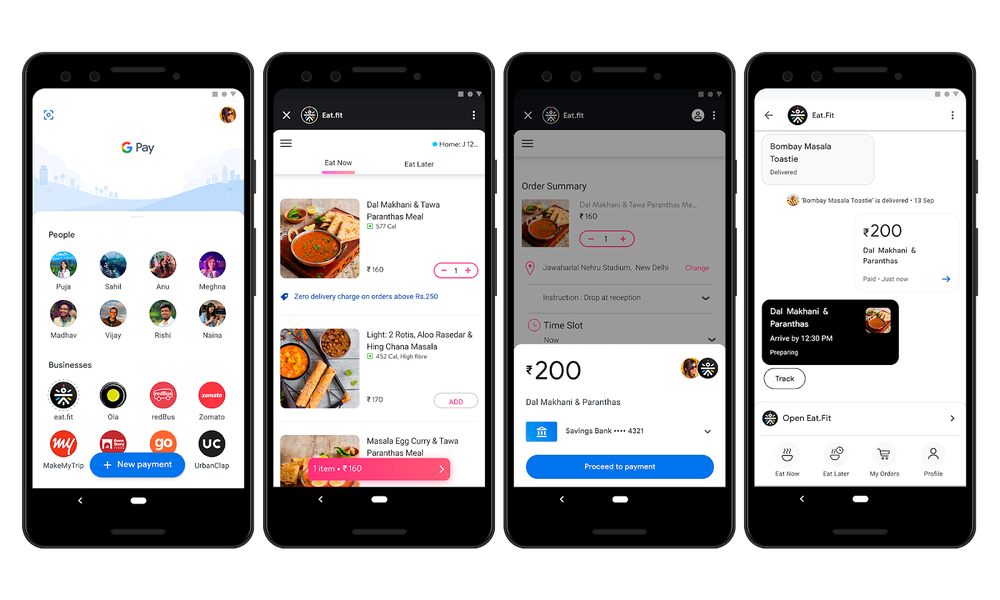 We’re excited to see how other organizations use Spot to create new experiences, reach new customers and make life easier and more convenient for the Indians who rely on them.

Spot is one of a number of new Google Pay initiatives we’re announcing today.  We’re also making payments available to debit and credit card holders through ‘tokenized’ cards--a secure way of paying for things using a digital token on your phone rather than your actual card number.  Tokenized cards on Google Pay will be rolling out in the next few weeks with Visa cards for HDFC, Axis, Kotak and Standard Chartered banks. And we will roll out support to cover Mastercard and Rupay and more banks in the coming months.

We’re also deepening our support for small businesses through a new app called Google Pay for Business: a free and easy way for small and medium-sized merchants to enable digital payments without the hassle of time-consuming onboarding and verification process. 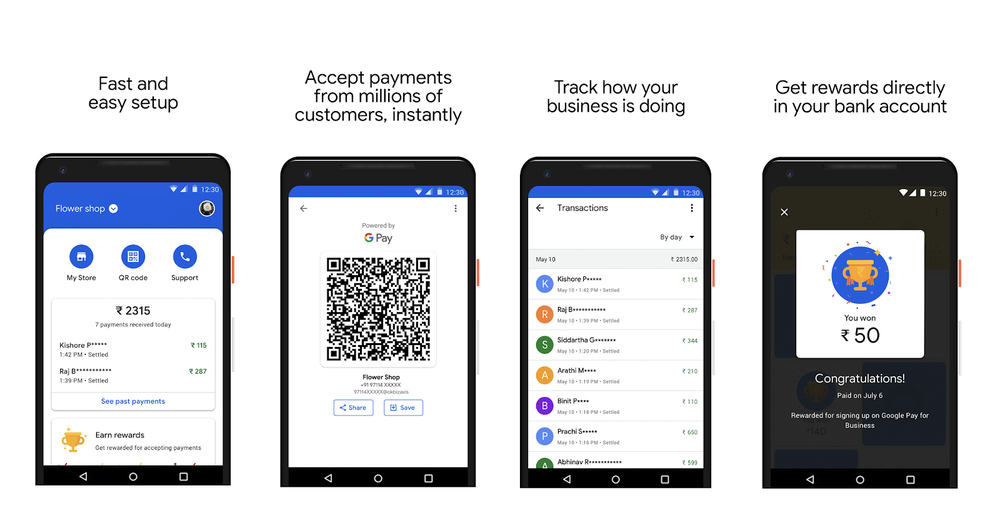 The reality is that despite the massive growth of digital payments, the vast majority of India’s over 60 million small businesses are still not benefiting from the growing digital economy.  We hope these initiatives will help merchants adopt digital payments with more confidence and help contribute to the long term growth of online financial services for the benefit of every Indian.

Enabling economic opportunities for every Indian also means helping people prepare for jobs and connecting them with the right opportunities. Today, we are excited to announce a new Jobs effort focusing on entry-level jobs, that are not easily discoverable online. Jobs will be available as a Spot on Google Pay to help job seekers find and prepare for entry-level positions that fit their needs. It uses machine learning to recommend jobs and training content to help these users prepare for interviews and learn new skills. Jobs also makes it easy for them to apply, schedule interviews and engage directly with potential employers.

Jobs will be available as a Spot on Google Pay to help job seekers find and prepare for entry-level positions that fit their needs.

We’re partnering with the National Skills Development Corporation for their Skill India program.  As part of this collaboration, Skill India students will be offered a seamless way to get started with Jobs and find better employment.  We’re introducing Job Spot with 24 early partners in retail like 24Seven and Healthkart, delivery and logistics partners like Swiggy, Zomato and Dunzo and hospitality providers like Fabhotels. We will be expanding this to more sectors and partners in the coming weeks.

We’re incredibly inspired by India.  With its world class engineering talent, strong computer science programs and entrepreneurial drive, India has the potential to contribute to advancements in AI and its application to tackle big challenges. We want to support and contribute to this with Google Research India—an AI lab we’re starting in Bangalore. The team will focus on two pillars: first, advancing fundamental computer science and AI research by building a strong team and partnering with the research community across the country. Second, applying this research to tackle big problems in fields like healthcare, agriculture, and education while also using it to make apps and services used by billions of people, more helpful.

From digital skills training to investing in AI research—we’re looking forward to continuing to contribute to India’s extraordinary progress and growth.