In the spirit of Basement Queens — an original song that was #madewithGoogleDocs — we recently caught up with SongCraft Presents to chat about how they use Google Docs to power their super cool web series where they bring artists together to write a song in less than a day.

We want to know how you use Google Docs, too, so share your own examples at +GoogleDocs or @googledocs with the hashtag #mygoogledocs. -Ed.

Hi Mike! Tell us a little about yourself and Songcraft.

SongCraft Presents is a web series about writing and recording a brand new song, usually in less than a day. In each episode songwriter Ben Arthur collaborates with a new artist — sometimes individuals, and sometimes a band — to write a song. Rob Reinhart, of the syndicated radio program Acoustic Cafe, usually hosts and narrates the show, and interviews the artists along the way. Al Houghton and me (Mike Crehore) of Dubway Studios, record the music, whether done in a studio or on the fly, and produce the finished product. Our director, Matthew Hendershot captures the process, and edits the footage into its final form.

2015 had us in 5 locations around the country producing a version of our series called “Songs of the Road,” as well as returning to SXSW 2015 to work with 3 more artists. You can see all those episodes at SongCraft Presents or at our YouTube channel. 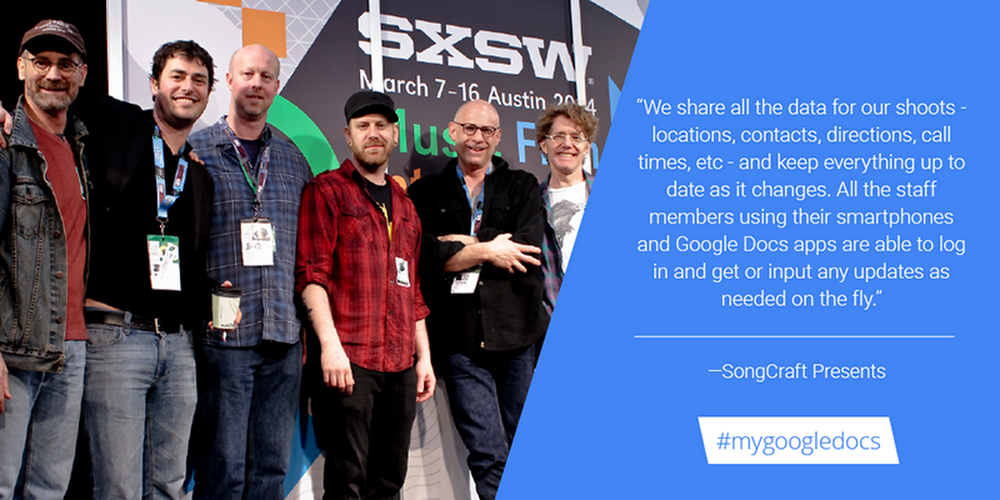 How does Google Docs fit into the Songcraft process?

We have been using Google Docs since its inception both individually and in various work relationships. Al and Mike started using Docs at Dubway Studios as a way to share information amongst both fulltime and part-time staff. The studio business has a lot of moving parts, and the ability to post forms showing what a producer or engineer needed for upcoming sessions, and that the support staff can look at for setup greatly streamlined the process. Last minute changes become less of a hassle.

As part of our “Songs of the Road” series, we had staff coming from all different locations around the country. We share all the data for our shoots — locations, contacts, directions, call times, etc. — and keep everything up to date as it changes. All the staff members using their smartphones and Google Docs apps are able to log in and get or input any updates as needed on the fly. As we add staff, we just share access with them according to their needs.

What are 3 tips you’d give for other folks who use/would consider using Google Docs?