We want to know how you use Google Docs, too, so share your own examples at +GoogleDocs or @googledocs with the hashtag #mygoogledocs. -Ed.

Hi Whale Thief! Tell us a little about who you are and what Movie Cram is.

Movie Cram is an annual event where we make a feature-length film — from pitch to production to screening — in just 24 hours. This year 200+ people participated, including 14 writers, 29 production teams, 10 musicians, and more than 100 actors. The event is run by Whale Thief, our six-member comedy group based in New York City.

Making a movie in a day requires a lot of parallel processes. The writers write their scenes simultaneously and then merge them into a single screenplay. The production teams shoot simultaneously, each with their own cast of actors. This whole time, musicians are recording an original soundtrack inspired by the script. Finally each production team edits their respective scenes and delivers them to us between 11 p.m. and midnight so we can quickly assemble them into a seamless playlist. At midnight, the finished product premieres in front of a live audience at  the UCB Theatre in Chelsea. 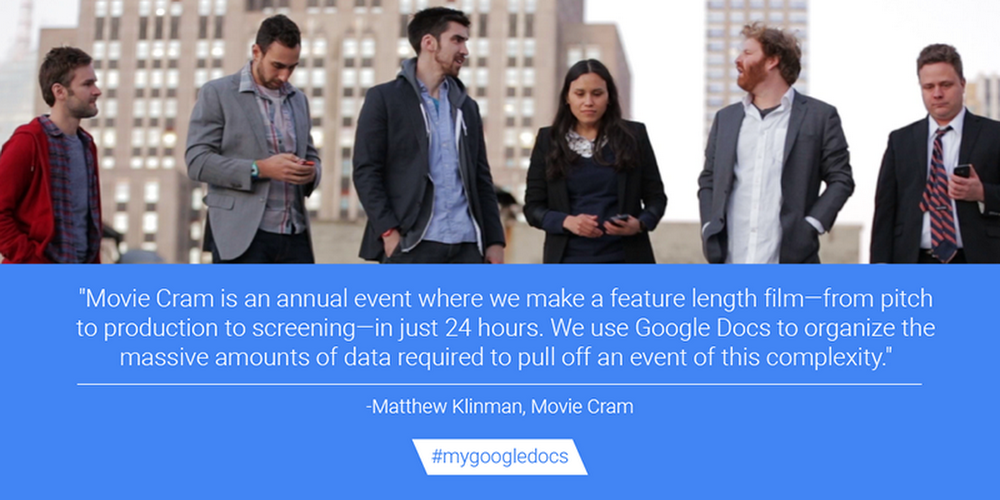 How does Google Docs fit into the Movie Cram process?

We use Google Docs to organize the massive amounts of data required to pull off an event of this complexity. In the months leading up to each year’s Movie Cram we use Docs to keep track of everything — from who’s available to do the event, to who canceled at the last minute, to everyone’s contact info, to our to-do and done lists. On the day of the event, we use it to take notes on all of the movie pitches, keep track of who’s writing what and which actors are assigned to which production teams, and organize the soundtrack files.

What are three tips you’d give to other filmmakers who use/would consider using Google Docs?

Thanks to the crew at Whale Thief for answering our burning questions about Movie Cram. For more, check out Movie Cram’s latest film on YouTube and read this New York Times article for details about how this audacious project works.
POSTED IN: